13 Benefits Of Chamomile Tea For Skin, Hair And Overall Health: Drink Up!

Chamomile Tea Benefits: Chamomile tea is prepared from dried flowers, and is known to boost immunity as well as reduce stress. 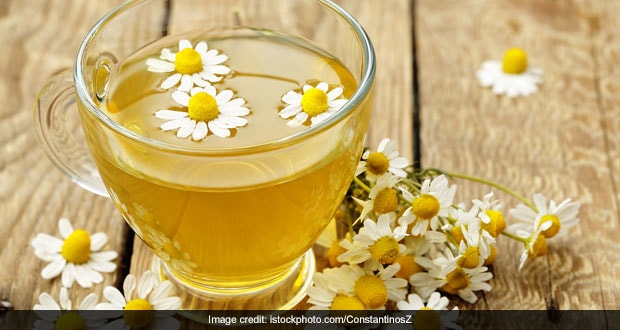 Chamomile, also referred to as Babune ka Phal in Hindi, "has a stellar reputation for healing, and with good reason. It is prepared from dried flowers and it brings an oasis of calm and tranquility," says Mr. Amit Anand, Owner of Mingle Tea. The beautiful Chamomile flower is native to Asia, Europe, Australia and North America, and blooms during the early summer months.Chamomile tea contains Chamazulene, an aromatic chemical compound that possesses anti-inflammatory, analgesic and antispasmodic properties. Whether you're overworked or suffering from a cold, "steep a hot cup of Chamomile tea, inhale its wonderful floral fragrance and then see your worries disappear as you sip this magical golden brew," assures Amit. Chamomile tea is a popular beverage across the world, it is steeped with both health and skin benefits that are hard to find in many other teas. The benefits of chamomile tea are in abundance. It is not only soothing and refreshing, but can also be beneficial for you in more than just one way.

According to Dietician Anshul Jaibharat, "Chamomile tea relaxes nerves and soothes the nervous system, therefore helping you sleep better. It lacks the addition of caffeine, and is best consumed before sleeping".

(Also Read: Sleep Inducing Foods: 7 Foods You Must Have To Catch Up On Your Precious Sleep)

Many studies have shown that Chamomile tea will not only kick illnesses to the curb, but also work as a great preventive measure. "It fights harmful bacteria, and has the ability to boost your immune system," says Dr. Ahuja, Fortis Hospital.

(Also Read: 4 Magical Foods That Could Help Boost Your Immunity)

Suffering from a terrible cold? One of the best benefits of chamomile tea comes into play here. Consider drinking a hot cup of chamomile tea and let it work its magic. You can also inhale steam from Chamomile tea (as shown below) to ease nasal congestion, a runny nose and sore throat.

(Also Read: Toss Them Away: 6 Foods That Aggravate Cold And Cough In Winters)

According to a study published in the Journal of Agriculture and Chemistry, Chamomile tea has pain-relieving and antispasmodic properties. It relaxes the uterus and decreases the production of prostaglandins (hormone-like substances that cause inflammation and pain).

According to the National Center for Biotechnology Information, "Chamomile tea has been valued as a digestive relaxant and has been used to treat various gastrointestinal disturbances including flatulence, indigestion, diarrhea, anorexia, motion sickness, nausea and vomiting".

Chamomile tea has been valued as a digestive relaxant.

Did you know that Chamomile tea has been used by the Romans, Greeks and Egyptians to treat wounds and promote healing? This is because the plant Chamomile tea is derived from Matricaria chamomilla L, which has anti inflammatory and antimicrobial properties. It also heals skin conditions such as psoriasis and eczema.

Chamomile tea is a gentle relaxant

Sipping into hot chamomile tea could do wonders for your skin too! This magic potion can be used as a natural skin bleach. Chamomile tea is packed with antioxidants which helps boost your skin health. It lightens the complexion and also gives you that glow you've always wanted.

This magic potion can be used as a natural skin bleach

Not just the glow, chamomile tea could help end your war with frequent acne break out too. Chamomile tea helps fade spots, eliminate acne scars and fight breakouts, if used topically, due to its anti-inflammatory and antiseptic properties.

Chamomile tea is a powerhouse of antioxidants and protects the skin from free-radical damage. It accelerates cell and tissue regeneration, helps tighten the pores and slows down the ageing process.

The harmful ultraviolet (UV) rays of the sun can cause various problems for your skin. Chamomile tea is known for its antioxidant, soothing and anti-inflammatory properties. You can brew the tea, chill it thoroughly, soak a towel in it and then apply to the sunburned area.

Chamomile tea is known for its soothing and anti-inflammatory properties.

Suparna Trikha, India's leading beauty expert says, "Never throw away Chamomile tea bags after using them, and refrigerate them instead. You can place the chilled tea bag over your eyes (especially after doing an eye massage) to lighten the eye area dramatically and reduce puffiness. You will find an instant difference in the way your eyes look and feel".

Fed up of dandruff? Drink a cup of chamomile tea. Yes we are serious. Chamomile tea helps eliminate and prevent dandruff, soothe scalp irritation and promote healthy healthy. You can use it as a final rinse after washing your hair. It's that simple!

Promoted
Listen to the latest songs, only on JioSaavn.com
(Also Read: 7 Easy Home Remedies to Get Rid of Dandruff​)

"Make Chamomile tea a part of your daily routine to reap the benefits," adds Amit Anand.