That Heart-Shaped Box Will Cost More This Year, as Cocoa Prices Rise 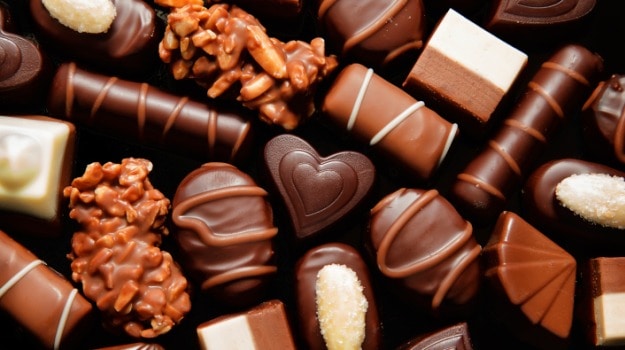 This year, perhaps more than ever, kisses may not come cheap. At least not those made of chocolate on Valentine's Day. The price of cocoa, the main ingredient in most chocolate, soared last year, forcing chocolate producers to raise prices and shrink packages.

A growing appetite for chocolate, particularly dark chocolate, which requires more cocoa, in China and other Asian markets is the primary cause, commodity analysts say.

"What's driving up the price, really, is rising demand for cocoa in Asia, though it also was pretty strong in North America and Europe," said Edward George, head of soft commodities research at EcoBank.

Another factor is the harmattan, a dry, dusty wind that began sweeping the major cocoa producing countries in West Africa in December, the beginning of the prime cocoa harvesting season. The harmattan has been worse than usual this year.

The average dollar price for a ton of cocoa was $2,921.05 last month, according to the International Cocoa Organization. That was slightly higher than the price a year earlier - but less than the peak average price of $3,270.27 in August, which reflected fears that Ebola might hinder the harvest of cocoa beans in Africa.

Several major chocolate companies declined requests for interviews on the effects of the high price of cocoa on their businesses. But Hershey, Mondelez International and Lindt & Spr  u  ngli, a Swiss company that owns Russell Stover, all raised prices as much as 8 percent last year to offset cocoa costs. Hershey's raised prices across all its products.

"L&S, like other companies in the chocolate industry, had to make occasional price adjustments on selected products in 2014 to absorb some of the raw material cost challenges - even if at first we always try to counter these challenges with increases in efficiency and volume," Sylvia Kalin, head of Lindt & Sprungli's corporate communications, wrote in an email. Mars, the maker of M&Ms and Milky Way, also announced plans to raise prices.

Kalin said consumers so far had not punished the company for raising prices. Data from Nielsen, a consumer research firm, hints at the price increases. While the amount of chocolate Americans bought last year rose 1.2 percent, to 2.2 billion pounds, the amount they paid for it rose 2.6 percent, to $13.6 billion.

Mondelez, which has several brands that use chocolate, like Cadbury, Milk and Lu, was not so lucky. It was the first to raise prices in the first half of last year, and European retailers refused to play along. That led to what Irene Rosenfeld, chief executive of Mondelez, described in an August conference call as "extended disputes and near-term distribution losses."

George, the commodity analyst, said the backlash was a surprise. "Several companies were shocked by how consumers simply switched to cheaper chocolate or stopped eating chocolate altogether," he said.

Then the company faced an outcry during the holiday season when it announced that it would no longer sell chocolate coins - though that was mild compared to the complaints last month, when it said it would make adjustments to Cadbury's Creme Eggs. (The Creme Eggs sold in the United States are made by Hershey and so are not affected.)

Mondelez said it would no longer make the egg's chocolate shell out of Cadbury Dairy Milk, but instead would use "a standard, traditional Cadbury milk chocolate," according to Valerie Moens, a spokeswoman for Mondelez. Dairy Milk chocolate has a high milk content, and the price of milk rose sharply last year.

Mondelez also reduced the number of Creme Eggs in a package to five from six. While Mondelez suggested a slightly lower price for the smaller package, Moens said, retailers set their own prices. And this week, Mondelez announced that it would sell a thinner version of its organic Green & Black's chocolate bars, in hopes of giving consumers a lower-price option.

On a quarterly call with analysts on Wednesday, Mondelez announced that $1.6 billion of its revenue last year came from higher prices, mostly because of the high price of cocoa. That was not enough, however, to offset the higher costs of the commodities it uses because higher prices pushed sales down. Investment analysts pressed Rosenfeld about whether the strategy was sound. David Driscoll of Citi Research said the amount of chocolate the company sold in Europe last year was down by "double digits" and other companies didn't seem to have suffered as much. "Why aren't these competitors following?"

"The reality is that a number of our multinational competitors have just lagged a little bit in their pricing response, and that's put some pressure on the business," Rosenfeld said. She said she expected competitors' higher prices to catch up over the first half of this year. "There's no question that the gap is wider than we would like it to be," she said. "We're going to stay the course."

Small artisanal companies have weathered the cocoa price roller coaster somewhat better, thanks to different ways of obtaining cocoa. Madécasse, for instance, buys all its cocoa beans in Madagascar. Madagascar produces a tiny amount of cocoa each year, 6,000 to 8,000 tons, but it is of a variety, Criollo, that chefs and confectioners prize for its intense flavor.

Criollo is also less susceptible to the diseases that strike the main type of cocoa, Forastero, which makes up about 85 percent of the world's supply. The Trinitario variety, grown primarily in Latin America and Southeast Asia, ends up in high-end dark chocolate and is roughly 12 percent of the world's cocoa.

"Our cocoa doesn't even trade at a commodity price because there's so little of it," said Tim McCollum, one of the founders of Madécasse. "Prices for Criollo are set in the spot market and go up and down day to day, so we don't really pay attention to what's happening in the commodity chocolate market."

Similarly, Alter Eco, a little company that sells chocolate, quinoa, rice and cane sugar products, said it had had little problem obtaining cocoa because of the arrangements it has with cocoa producers to ensure fair trade and an organic bean. Alter Eco, which had sales of $15 million in 2014, works directly with its cocoa bean farmers in Latin America, returning some of its profit to them and investing in infrastructure to support their work, said Edouard Rollet, co-founder and co-chief executive of the company. It also helps them improve yields.

"The supply chain in West Africa is at the heart of the price problem," Rollet said. "Farmers are at the bottom of the chain, and they're not getting any richer, thus they don't see a future in cocoa," he said. "So farmers there are planting rubber trees instead of cocoa trees."

Under the fair trade agreement Alter Eco has struck with its suppliers, farmers are paid a $200 premium for each ton of beans they sell. Rollet said the price had increased some, but Alter Eco has not yet raised prices on its chocolate bars and truffles. "If I was a smarter business person, I would raise prices now," he said.

After negative reports on labor conditions in cocoa production, Mars, Hershey and other large chocolate makers have committed to bring their practices more into line with Alter Eco's. Hershey, for instance, said last week that it now obtains about one-third of its cocoa from "certified and sustainable" farms and is working toward buying all its beans from such farms by 2020.

On a call with investment analysts, Bert Alfonso, chief financial officer at Hershey, said the company was increasing prices 5 to 6 percent. He predicted that would reduce sales volumes 2 percent.

"While we've seen some improvement recently and that's good, we still have cocoa that's higher than the 2014 level," Alfonso said.