Thatte is the Kannada word for plate and this flatter idli takes its name from its shape that is reminiscent of a flat disc or a plate. Know more about it here! 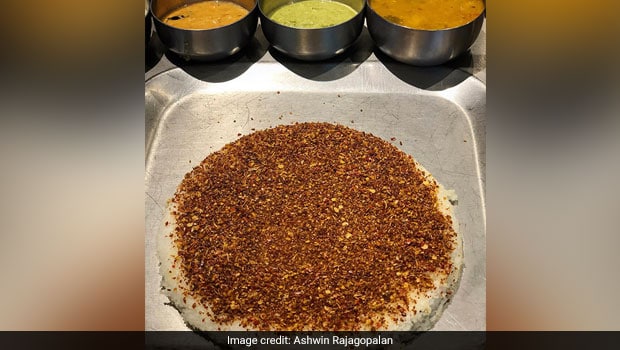 Ask anyone who has been on the Bengaluru-Mysuru highway about travelling time between the two cities and you will always hear varying estimates. Traffic, especially on weekends can be trying. But there's one thing that provides the perfect panacea to all the traffic woes along this busy stretch that also leads to popular destinations like Coorg and Bandipur - the food. There's Maddur famous for its eponymous Maddur Vada, Ramnagara and its Mysore Pak, Bhuvaneshwari, the nondescript Military hotel just outside Mysuru that serves delicious mutton specialities. But the first port of call for most foodies is Bidadi.

Bidadi, an Industrial suburb of Bengaluru, is strongly associated with its bisi (hot) thatte idli. Of course, it's not the only town in Karnataka that can call the thatte idli its own, there's also Tumakuru (formerly Tumkur), less than two hours from Bengaluru, that's also well-known for its thatte idli. My first thatte idli experience was at Bidadi and it was the perfect late breakfast after braving some typical Bengaluru rush-hour traffic. Outlets like Shivsagar are popular pit-stops for road trippers along the Bengaluru-Mysuru highway and this is where I sampled the Bidadi thatte idli.

Bidadi, an Industrial suburb of Bengaluru, is strongly associated with its bisi (hot) thatte idli

Thatte is the Kannada word for plate and this flatter idli takes its name from its shape that is reminiscent of a flat disc or a plate. You will notice busy idli cookers where these idlis are cooked non-stop with the same precision that you will probably find at the Toyota Motors factory in Bidadi. Each thatte idli is almost equivalent to the portion size of 2-3 idlis and is served with chutney at most restaurants in Bidadi. The idli is made with a similar batter as the conventional idli except for the addition of tapioca pearls (sabudana) that alters the texture. The thatte idli is slightly more porous and spongy. Many eateries at Bidadi crown their thatte idli with a dollop of hand-churned Bene (butter) and serve it with a spicy coconut chutney.

Chennai has seen a wave of thatte idli eateries debut in the 2010s, some of the city's foodies swear by restaurants like Vaishnavas (in Kilpauk) while ID, the city's popular restaurant chain has added thatte idli to its menu. The ID version is slathered with idli molaga podi (idli powder or gun powder) and is a favourite with frequent fliers at their Chennai airport restaurant.

It's same case in Bengaluru where the thatte idli is making an appearance even in luxury hotel menus, as more and more hotels add local breakfast specialties to their menus. It was one of the many local breakfast staples I tried at the Aloft Bengaluru Cessna Park along with the Davangere-style Bene dosa (butter dosa). Their version of the thatte idli was replete with the knob of butter and is mighty close to the Bidadi Thatte Idli. You can try their recipe at home along with a couple of chutneys:

The Thatte Idli is a great breakfast option and also makes for a healthy (the butter is optional!) anytime snack. While it tastes best with a traditional coconut chutney, you can also try it with sambar or a chicken or vegetable curry. Even if you're not likely to drive to Mysuru from Bengaluru via Bidadi anytime soon, you can try this dish at many restaurants in Chennai or Bengaluru.