The Foodie Traveller: Breakfast With the Faithful in Varanasi, India 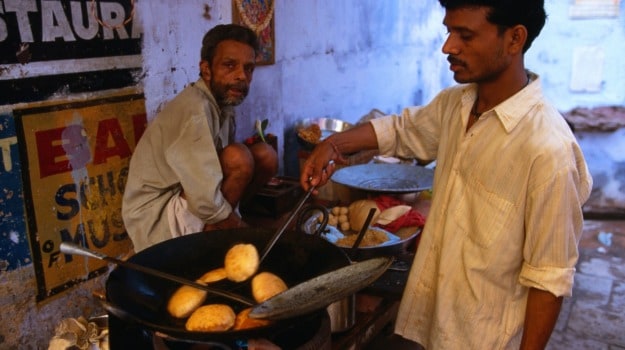 For pilgrims to India's holy city, the day begins in delicious fashion with kachoris - stuffed pastry balls fried at street stalls and served with vegetable curry

From the acrid smell at the cremation ghats to the feel of the slime-covered buffalo as it shoulders you out of its way in the narrow lanes, Varanasi makes your senses scream. But don't let your sense of taste miss out on the fun - devoted visitors to the holy city certainly don't.

A faith-sustaining breakfast of kachoris is as much a ritual here as an early-morning bathe in the Ganges.Roadside stalls across the Old City open from first light, their charcoal stoves burning bright in the gloom. A man sits in front of smoke-blackened walls and rolls balls of pastry filled with a thick dhal paste into discs. They are dropped into a pan of oil or ghee and within seconds burst into a golden globe the size of a tennis ball.

Subzi, a mixture of potato and other vegetables, is spooned into a pattal (a dish made of dried leaves) and served with the the kachoris. Each stall's subzi is different, so people will gorge at their favourite or go from one to the next. Queues become scrums at the time of big festivals such as Maha Shivaratri (17 February).

Virendra Pandey from Kedar Guest House took me on a tour of the best-known stalls. The oily sweetness of the kachori and the spice of the subzi make a very moreish combination, so you'll soon wolf down half a dozen. But at five rupees (about 5p) each, kachoris shouldn't break even the tightest of traveller budgets.

By 11am the kachori stalls are all shut - leaving the devoted to wait till dawn again to sustain body and soul.