The Most Disturbing Meal Ever! 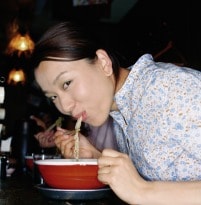 There are some things that make you squirm, yelp and shriek in horror. They make you question humanity and a man's ability to differentiate between right and wrong. This is one such story.

The Japanese have been known for their bizarre obsession with eating animal-based delicacies like horse sashimi, fermented duck eggs and wasp crackers. But eating a fresh frog that twitches and blinks while on your dinner plate is nothing short of nauseating.(More: Shocking foods you won't believe people actually eat)

The dish is known as bullfrog sashimi (fresh, raw meat prepared alive) or 'ikizukuri', and consists of a frog sliced up on order, some soya sauce and a slice of lemon on the side. What's worse is that the variety of frogs used isn't the usual one, but are specially bred for consumption. The frog stares right at the diner while its boney remains swim in clear broth.

This piece of news caught fire after someone shared a YouTube video of a man preparing the frog and a happy woman eating it. The video at this point has over 1.5 million views and has stirred up a real controversy. This is not to say that all Japanese delicacies are disturbing. The world happily embraced raw fish in the form of sushi, but it seems like raw frog hasn't got the same bubbling response.

Disclaimer: The video is of extreme graphic content. Watch at your own risk!

Nutritionist Rujuta Diwekar Recommends Ramphal: 5 Things You Should Know About The Seasonal Fruit
PVR HOME Is All About Luxury, Fine Dine and World Class Wines