The Secrets Of Laos In A Bowl of Soup 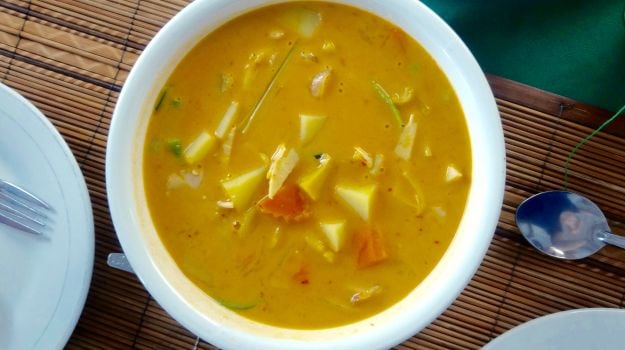 In a recent stroke of luck, I was able to join my parents on a last-minute trip to Laos. Naturally, the first thing on my mind was: What will the food be like? Never having encountered Lao cuisine in the United States, I had no idea what to expect. So my palate was piqued when we arrived in Luang Prabang, the country's former northern capital at the confluence of the Mekong and Nam Khan rivers.

Once settled in we immediately sought out some local food and stumbled across a restaurant off the main road, named Bamboo Tree. Lured by the enticing scents of coconut and lemongrass and by a menu on which we recognized nothing -- always a good indicator of foodie adventure -- we sat down. The menu told of the restaurant's Lao chef and owner Linda Moukdavanh Rattana, who was raised cooking in her family's Lao restaurant and whose favorite dish was something called "Secret Soup," which combined classic local ingredients. Ordering it was a no-brainer.

The soup arrived with a handsome buttery orange color that foretold of coconut milk and chilies, with green hints of basil and kaffir lime leaves. One slurp later I was in gastronomic exotica, floating through a savory journey of creamy coconut offset by tangy lemongrass, spicy ginger, citric lime, aromatic basil and kicking chili heat, rounded out by a rich harvest of vegetables. Somewhat to my culinary embarrassment, I am not usually a fan of coconut- and chili-based food -- Thai, mostly -- since I tend to find it too cloyingly sweet, spicy or oily. But this soup opened my taste buds to the complex yet comforting flavors these ingredients can have when plucked fresh and combined in a meticulous way that allows each subtle flavor to come forth. If this was Lao food, I needed to learn more. When I heard Linda offered cooking classes, I signed up.

A variety of spices are used in Lao cuisine to produce different levels of heat and add flavor complexity in balance with ingredients like coconut milk and lemongrass. Credit: Copyright 2015 Rose WinerThree Key Ingredients

As our class visited the local market for ingredients and choose dishes to cook (obviously my vote was for Secret Soup), I took my culinary questions to the source. According to Linda, the three key flavours of Lao cooking are galangal, lemongrass and kaffir lime. Although these ingredients also appear in Thai and other Southeast Asian food, Linda affirmed they form the triumvirate base of Lao cuisine.

Among these ingredients I became particularly fascinated by galangal, which I had never seen before, and coconut milk, which I usually find too overpowering. Linda informed us that while related to ginger, galangal is much harder in texture and has more earthy and citrus flavors -- so the two should never be substituted. As for the fresh coconut milk, it is easily found in Laos and its freshness is crucial for creating a dish that isn't too creamy or sweet. But where fresh milk is hard to come by (as in the United States), one can substitute pure canned milk that avoids sweeteners, emulsifiers and other additives. Either way, adding coconut milk at both the beginning and end of the cooking process is key to balancing the chilies' heat without veering toward overly sweet.

As with many Lao dishes, Secret Soup embodies a larger theme of Lao cuisine: years of mutual culinary influence with neighboring countries. For example, Laos and northeastern Thailand (Isan) were once part of the same country, leading to a shared culinary heritage. The Secret Soup contains items typically associated with Thai food, such as coconut milk and chilies, while also emphasizing the complex umami flavors, aromatic fresh herbs and spicy edge apparent in both Lao and Thai dishes. Yet the soup also displays typical Lao spicy-sour-bitter notes - from the blend of galangal, lemongrass, kaffir lime and chili - instead of classic Thai sweet-sour flavors. Other Lao dishes might delicately indicate that the Lao originally migrated from China, carrying Chinese techniques with them, and many foods in the Laotian capital Vientaine still carry the legacy of French Indochina.

Local market vendors display their many varieties of sticky rice, a Lao diet staple. Lao people eat more sticky rice than anyone else in the world. Credit: Copyright 2015 Rose Winer

These similarities, according to Linda, often make it difficult to identify "authentic Lao" cuisine. In fact, the close correlations between Thai and Lao food are the reason for the seeming lack of Lao restaurants in the United States. Many Lao restaurants are established under the guise of Thai, since the latter have achieved more mainstream popularity. But a number of Thai places can actually be identified as Lao through traditional Lao dishes such as sticky rice - the staple food of the Lao - papaya salad, fermented fish paste, or others, such as Secret Soup, based on the three key Lao ingredients. Ultimately, Secret Soup was not only my first taste of Laos - it also gradually expressed the country's elaborate history of culinary exchange, appropriately lending the dish's title new meaning. Just as I pass on the recipe from Linda here, you can carry on the tradition by translating the culinary complexities of Laos to your own dinner table.

3. Add chicken, stirring over high heat. Stir in 1 cup coconut milk and the chili paste, cooking for a couple minutes.

4. Stir in the other ingredients, finishing with the rest of the coconut milk and the water. Cook for 10 minutes.

5. Just before serving, add the basil leaves and lime juice, and more coconut milk, if preferred.

Galangal, kaffir lime and lemongrass can be ordered online or found in specialty Asian markets. Do not substitute for any of these ingredients as they are crucial to the soup's flavor -- but they're also just for flavor, so don't eat them!

For the chicken, I would suggest sticking with white meat, which works very well.

Add the rest of the coconut milk, and the water, gradually -- you can use less than the recipe calls for, depending on how much of the coconut flavor you prefer. But also make sure to taste the final result after everything cooks, since you may end up wanting to add in that extra coconut milk before serving.

If your wok isn’t large enough for all of the ingredients, transfer to a pot on high heat after the first cup of coconut milk and the chili paste are added.