This is How You Can Help the Drought Situation: #JitniPyaasUtnaGlass 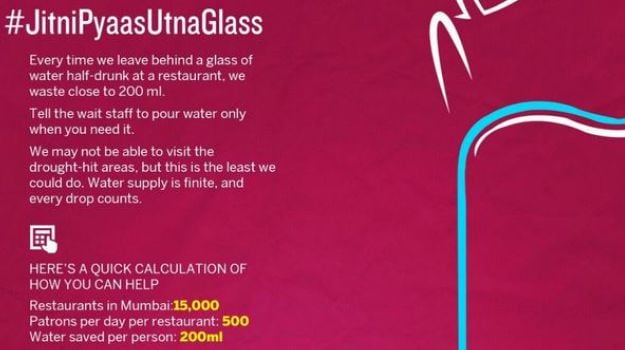 "We all kept talking about the drought, the water crisis, people struggling, many dying. Talking doesn't help but I knew not how to make things better." -- Prajakta Samant, initiator, #jitnipyaasutnaglass campaign.

While severe drought prevails across various states in the country, to many of us, it is just a newspaper headline - the severity of the situation has probably not hit us yet. Cocooned in our shells of ignorance, we take heed only after reading trails of media reports of people struggling or farmers dying for precious drops of water. It is only then, if so, that we pay attention to the careless pitter-patter of water from our taps.

Water conservation campaigns have been in existence ever since the environmentalist received faintest of hints of it becoming one of the scarcest resources on the planet. One of the primary lessons in schools has always been about our earth being 70% water. States like Karnataka, Uttar Pradesh and Maharashtra have been facing the brunt of inadequate rainfall and delayed monsoon as a result of which, the water supply in these regions has taken a severe hit.

It is not uncommon to hear people say, "The best we can do is to ensure no wastage of water at a personal level. How can we be of any help to the ones suffering?" The same question kept prodding Ms. Samant until she arrived at one of the most innovative ways to help lakhs of drought-hit people.

"I was heading back home after my meal with my friends at one of the Chinese restaurants here. I was stuck in traffic and kept thinking about how can a person make a difference? Beyond personal level, apart from charity, what else can be done? It is then when the idea struck me and I decided to go ahead with it," shared Prajakta Samant.

Prajakta's initiative is one of the most revolutionary ways to conserve litres and gallons of water to tackle the present water crisis. She collaborated with Surajit Patro and designed a poster to kick start the campaign. After much brainstorming the name of the initiative was zeroed down to what can be the most apt one - #jitnipyaasutnaglass.

The idea was simple, to engage with restaurants and encourage them to endorse and implement the idea of water conservation in their daily operations. And how was this proposed? By serving water to customers and patrons only when they ask for it.

"People in the restaurant and hotel industry are trained to keep filling the glasses of their customers. Most of the times, it simply goes down the drain. I thought what if water is served only when asked for, only as much as desired by the customer? It could solve some bit of the problem," noted Prajakta.

The campaign poster simplifies the mathematics of conserving a glass of half-drunk water per patron. It reads, "Every time we leave behind a glass of water half-drunk at a restaurant, we waste close to 200ml of water." Assuming that Mumbai has close to 15000 restaurants with 500 people visiting per restaurant every day, 200ml of water saved per person equals to 1.5 million litres of water, daily. That's almost half a billion litres saved every year. Now imagine if cities across the country implement such a small exercise, how much water can be saved!

"Lots of things were on my mind. I had already written to a popular brand which owns close to 40 restaurants across the country to help support the initiative and spread the world. I wanted the initiative to go pan-India, but they never got back. Surprisingly, a few twitter posts from my account and some more from that of my friends and family did the trick. I never really had to go to any restaurants. There were people mailing me, connecting with me to be a part of the initiative," expressed Prajakta.

Prajakta launched the initiative on 16th April 2016, within a few days it picked up on its own. "I was surprised when some very popular restaurants operational in Mumbai got in touch with me and said they wanted high resolution copies of the poster to put up in their outlets," said Prajakta.

We spoke to Ishaan Bahl, co-owner of the famous Khyber restaurant and the recently opened 145 and Liv in Mumbai. Khyber and 145 are a couple of restaurants out of many others who are the active participants and propagators of Prajakta's water conservation initiative. "I think it is a wonderful initiative. It was brought to my notice by one of my teammates Mr. Sashi Khadani and I decided to go ahead with it," mentioned Ishaan.

According to Ishaan, 145 receives a daily footfall of close to 1000 people. 200ml of water saved per person daily is a great achievement in itself. "I know of societies which have their own water tanks, no part of Mumbai is unaffected by the crisis. For those who received water 24x7, four hours of water cut was a major thing. I have had days when water was gone for close to eight hours straight. We didn't have water 6 pm onward till the next day in the morning and this kept happening for days. As a restaurateur I felt it was imperative for me to be a part of this movement," shared Ishaan

#Jitnipyaasutnaglass has not even completed a month of its existence and restaurants across the country are catching up with it, requesting their patrons to ask for water to be served strictly when needed. "I honestly have lost track of restaurants getting in touch with me. For me implementation is something that matters the most. Restaurants, small dhabas have taken printouts of the poster and are following the campaign on their own. I will be more than happy if this spreads further," concluded Prajakta.

It remains a task to keep a track of restaurants following Prajakta's initiative; many other restaurants are also doing their bit to save water in their own little ways. For instance, Smoke House Deli in Mumbai has directed its staff to clean its kitchen using the residual water gathered from ice.

An idea is an idea, big or small. As it is said, tiny drops of water make the mighty ocean, the initiative is just a humble start to bring about a massive change. One hopes that it catches up well with many more and aids in solving the water crisis - at least till the monsoons wash away the misery of drought-hit people.