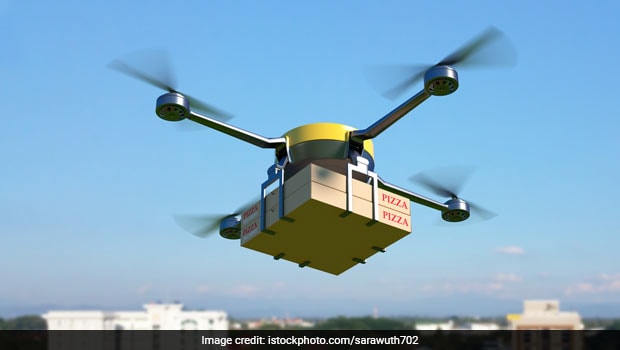 Coming soon - food delivered to your door by a drone! One of the biggest and most popular food delivery apps in India - Zomato - announced on Wednesday, June 12, that they have successfully tested a hybrid drone for delivery of food. This comes against the backdrop of tech-advancements in the food delivery segment around the world. Delivery companies are now increasingly using drones to drop food at customers' houses to circumvent traffic that inevitably leads to delays in food delivery. With Zomato successfully testing food delivery by drones, urban dwellers can now expect food to reach them before it gets cold. In its test flight, the Zomato drone successfully carried a 5 kg payload and covered a distance of 5 km in just 10 minutes!

The news was announced on Twitter by Zomato Founder and CEO Deepinder Goyal who tweeted, "We successfully tested a hybrid drone - fusion of rotary wing and fixed wings on a single drone; covered 5 kms in 10 mins with a peak speed of 80 kmph; with a payload of 5kgs. Exciting times ahead!" (sic)

Also Read: This Was The Most Ordered Indian Dish Of 2018: Zomato Releases Food Trends

We successfully tested a hybrid drone ????️ – fusion of rotary wing and fixed wings on a single drone; covered 5 kms in 10 mins with a peak speed of 80 kmph; with a payload of 5kgs.

In a blog post, Goyal said that the tech was born out of an attempt by the food delivery company to deliver food to customers within 15 minutes of it being prepared. "Fifteen minutes is only possible if we take the aerial route - roads are not efficient for very fast delivery. While our biker fleet nowadays delivers in 30.5 minutes on an average (which is the fastest in the industry as far as we know), every incremental minute with our fleet becomes harder as it separates our users from their ordered food", he said in the post. Zomato had acquired local drone startup TechEagle, with the help of which the drone has been developed. Goyal revealed in the blog that the gadget is lightweight and has inbuilt sensors to detect and avoid "static and dynamic objects".

Goyal also spelled out in his post how the drone delivery is going to work: "A drone will pick up the food package from a restaurant hub (a dispatch station around a cluster of restaurants), and drop the package at a customer hub (a landing station close to dense communities), and come back to the dispatch site using a mix of different and appropriate flight modes." Although the drone is fully-automated, currently it is being tested with remote pilot supervision, which Goyal said, will be done away with, in the future.

How To Make Pasta Healthy? This Protein-Rich Paneer Pasta Is The Answer
This 4-Ingredient Oats Chocolate Mousse Is The Sweet Treat You Deserve Today (Video Inside)