Why The World Loves a Sandwich 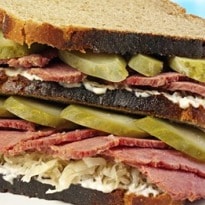 From the Vietnamese banh mi, the Indian vada pav and the Portuguese francesinha to the good old BLT and even ice-cream ... the sheer choice of sandwich ingredients is an endless joy

A friend recently dropped the bombshell that he'd "had to settle for a chicken triple from the Co-op" for his lunch. Talk about hitting rock bottom. It sums up the way we often approach sandwiches in the UK though, as if they're a second-rate option to fall back on when we can't think of anything better. We're supposedly a nation of sandwich lovers. We had an Earl who put his name to the damn things (although he didn't invent them, as is often claimed - apparently, that was Rabbi Hillel the Elder), yet we're put to shame by countries such as Mexico, the US and India who really know how to celebrate their sangers. There's still a lot more to avoid here than to love. I live in fear of cafe counters lined with trays of crusted-over chicken tikka mayo; I have nightmares about soggy, tomato-juice saturated bread; I come out in a rash at the sight of triangular supermarket packets labelled with the words "protected environment".

It's time to show the sandwich some respect.

I started writing a blog called The London Review of Sandwiches around a year ago now, because I found myself whingeing about the lack of a guide on where to find the best in town, while simultaneously doing nothing about it myself. It was time to put up or shut up. Next came a book, 101 Sandwiches, which provides recipes for the best examples from around the world. I went from serious sandwich appreciator to shameless sandwich geek in the space of a few months. Oh, and I also got a bit fat.101 sandwiches, you say? Really? Surely there can't be that many worth writing about. Actually: 62 didn't make the cut. A balance had to be struck between including the most notable - Vietnamese banh mi, the Sicilian-American muffaletta, the British shooter's - and the less well-known, the sandwiches that really need shouting about - the spiced Indian vada pav, the Portuguese francesinha (it has beer sauce), and the Tunisian fricassee.

I won't delve too far into the history of the sandwich here (you've got to buy the book, see?) but it is worth noting one reason for its popularity as an arrangement of ingredients - a real biggie - and that is its potential for stepping up to the plate (sorry) at any time of day. Consider breakfast: the butties, baps, sauces and toasties. Imagine the horror of a hangover without the possibility of a bacon butty to mop up the shame. Imagine a greasy spoon that didn't serve a slightly filthy fried egg in a bap, crisp of bottom and wibbly of yolk, squiggled with that weird "fake" brown sauce found only in cafes, housed in clog-nozzled bottles.

Lunchtime, of course, is where the sarnie truly rules; nearly every kid in the country grew up lifting the lid of their lunchbox (mine was purple, with Rainbow Brite on the front) to find four little squares or triangles inside (everyone knows triangles taste better, right?). Those were the years of sandwich spread and Mighty White. Then there's afternoon tea: crustless finger sandwiches filled with cucumber, ham or smoked salmon - dainty, restrained and kind of ridiculous. At dinner, it's time to bring out the big guns. The evening is the domain of serious sandwiches; the French dip, the burger, the meatball sub. It's never too late in the day for a sandwich, though. After dark is about the guilty pleasures: kebabs, crisps and chips. Anything is acceptable after 10pm. Or when drunk. Or hungover.

There's a sandwich for every situation, then, and a sandwich for every taste. I wanted space in the book to tell you all about the pambazo, a Mexican stunner that involves bread drowned in guajillo pepper sauce and a filling of potatoes and chorizo, but I could fill a book with Mexican sandwiches alone. Then there's the American "football sandwich" - a kinky little ham number, covered in a sauce made with melted butter, poppy seeds and mustard. No room for that either. I kind of regret that decision. There's the endearingly named "shit on a shingle" (rehydrated dried beef with toast, basically - a US military invention), Elvis's fools gold loaf and the very recently invented, hysteria-inducing cronut and ramen burgers. None of them made it to print.

The one question I've been asked the most since I've written the book is, of course, "what is your favourite sandwich?" A difficult question, which makes me suck air through my teeth the way a mechanic does before giving you a quote. How am I supposed to know what I'll be in the mood for? What time of day is it? Where am I? What's the weather like? Sometimes I think it's hard to beat the classics you grew up with; I can never resist my dad's cheese and onion for example, a punishing beast, which contains a spread made with mayo, grated cheese and (hold me as I do it), grated onion, a splash of vinegar, salt and white pepper. It's intense and extremely anti-social. I also love the combination of well-cooked ham and nose-searing mustard, occasionally with salt and vinegar crisps. A BLAT, perhaps (that's a BLT with avocado), or fish fingers with, controversially, mayo and a sprinkling of capers. It seems that as much as I adore a pork belly banh mi, a stuffed-to-bursting torta, a well-spiced falafel or, ooh, a Japanese katsu sando, when it really comes down to it, the flavours of childhood win.

Listen to the latest songs, only on JioSaavn.com
I bet you know what's coming. Indulge me. What is your favourite sandwich? Is it a childhood favourite or an acquired taste? Classic, weird or downright shameful? I need to know what you spread on your bread.