You Should Cocoa: Sumptuous Recipes for Chocolate Cakes and Brownies 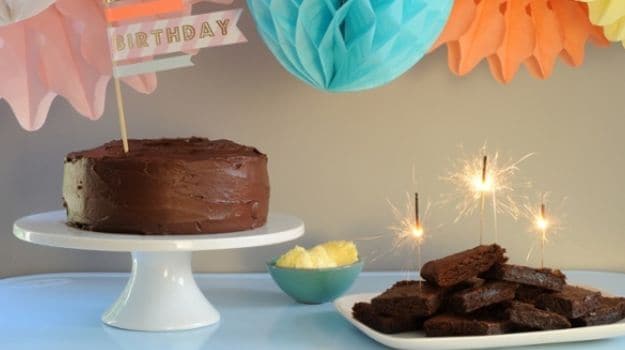 In baking, humble cocoa powder is easier to work with and stronger than expensive chocolate, and can hold its own against the other ingredients. See for yourself in these easy birthday cake and treacle brownie recipes.

As good as it is to bake with chocolate – chopped, grated, melted, in slabs, chipped, or shaved into wafer-thin curls – every chunk of the stuff that I put into a cake batter or brownie mix is one less chunk for me just to snaffle at the kitchen counter. It can feel wasteful – and expensive – to slip good-quality dark chocolate into your baking, where it’s muted by all of the sugar and butter, its subtleties lost entirely. I prefer to bake with cocoa powder: it is more potent and bitter than processed chocolate, and with the depth of flavour to enable it to hold its own against the other ingredients in a recipe. Because it’s a powder, too, it’s far easier to incorporate without affecting the texture or mouthfeel of the bake.

Black treacle adds a bittersweet depth to these brownies – they’re perhaps the richest and most chocolatey I’ve ever had. Spoonfuls of clotted cream for serving help to balance this sweetness, sitting bright against the dark clout of the cocoa and treacle. Bake these until they’re barely set for an almost melting, squidgy middle.

1 Preheat the oven to 180C/350F/gas mark 4 and line a 15x22cm rectangular tin with baking parchment. Any similar sized tin will do – a 20cm round cake tin will be more or less equivalent in volume, while a 20x20cm square tin will give you a slightly shallower brownie (be sure to decrease the baking time accordingly).

2 Melt the butter over a low heat, then whisk in the treacle and sugar. Stir the flour, cocoa powder and salt together in a separate bowl, breaking up any rogue clumps as you go. Whisk the eggs, one at a time, into the melted butter mixture, then lightly beat in the dry ingredients, just until the batter is smooth. Don’t worry if the mixture’s slightly grainy.

3 Spoon the brownie batter into the prepared tin and lightly smooth the surface. Place in the oven to bake for 25-35 minutes. Exactly how long it takes to cook will vary according to the size and shape of your tin, but the most important thing is not to over-bake the brownie. For a perfectly dense, fudgy texture, cook until the brownie mix no longer jiggles in the centre when you gently shake the tin. The surface should be dried and even, and a knife inserted into the centre should come out with just a little sticky batter on it – don’t wait until the knife emerges totally clean, or you’ll have cooked it for too long.

4 Leave the brownie to cool completely in its tin before serving in nine generous chunks, with scoops of thick clotted cream alongside.

Chocolate cake is all or nothing: if it’s not hyperbolically rich and chocolatey, it’s not worth making. It’s tempting, then, to throw everything you have into it – melted chocolate, chocolate chips or chunks, swirls of salted caramel or a capful of booze – to make it the best that it can be. But though I’m all for a commitment to extravagance, for me the best chocolate cakes are all the better for being pared back. Rather than weighing down the cake with extras here, I’ve just made a simple cocoa powder batter complemented by light brown sugar, vanilla, coffee and salt. The sugar adds a toffee edge to the sweetness, vanilla and coffee bolster the chocolate flavour, while the salt brings the whole thing into focus. No expensive chocolate, no fuss or fiddly detail – just a perfect chocolate cake.

You could swap the cocoa buttercream for a richer chocolate ganache, made with dark chocolate melted into an equal weight of scalding double cream, but I think that the heaviness of ganache smothers the mild cocoa kick of the cake. A compromise, if you want something a little more grown up, would be to ice the cake as detailed below, chill it well then glaze with a thin coat of ganache afterwards.

1 Preheat the oven to 180C/350F/gas mark 4. Grease two 20cm round cake tins (loose-bottomed or springform are best) and line their bases with circles of baking parchment.

2 Beat the butter with the soft light brown sugar in a large mixing bowl for several minutes, creaming the mix until it is perfectly smooth and light. Stir in the vanilla extract. Add the eggs one at a time, beating well between each addition to minimise clumping and curdling. Stir the flour, cocoa powder and baking powder together, then add this mixture to the wet ingredients, mixing just until smooth. Add the dissolved coffee and fold it in to create a soft, velvety cake batter.

3 Divide the batter between the two prepared tins and bake for 30-35 minutes, until well-risen and springy to the touch. A small knife inserted into the centre of each cake should emerge with no more than a couple of crumbs stuck to it. Leave the cakes to cool completely in their tins before unmoulding.

4 For the buttercream, beat the butter until smooth, then stir in the cocoa powder and vanilla extract. Sift in the icing sugar a third at a time, mixing well as you go. The buttercream should be luxuriantly thick, but still soft enough to spread on the cakes without ripping them. Add a dash of milk or coffee to slacken the mixture, if necessary.

5 Smooth a thick layer of cocoa buttercream over one of the cooled cake layers, then sandwich with the second layer and ice the top. Spread the remaining cocoa buttercream generously around the sides of the cake.

An easy birthday cake and squidgy chocolate brownies made easier with cocoa powder. Photograph: Jill Mead for the Guardian