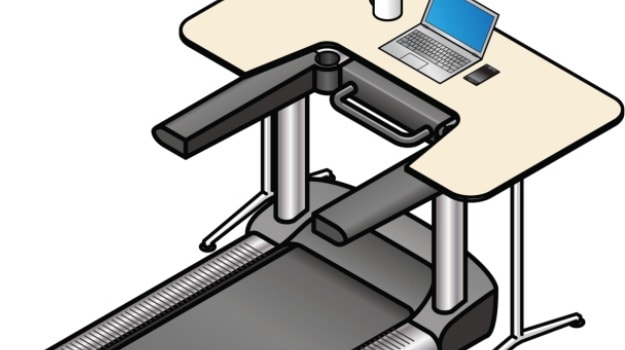 One of the curses of an urban lifestyle would certainly be the torture of long working hours. For an average working professional a normal day would start by waking up to the blaring alarm clock, snoozing it a couple of times and getting consumed in the morning madness. Long working hours can have a number of side effects. What's worse is the fact that due to this phase of prolonged physical inactivity most working professionals find very less time to exercise.

Walking workstations were introduced to help people who found themselves stuck in desk jobs. It allows them to remain active and alert at work by choosing to switch to a 'walk-while-work' mode. However, it seems the benefits of such a fitness revolution are short-lived as a recent study claims that treadmill desks are a futile attempt to promote fitness.

"Treadmill desks are not an effective replacement for regular exercise, and the benefits of the desks may not justify the cost and other challenges that come with implementing them," said John Schuna Jr, assistant professor at Oregon State University.

The study appeared in the Journal of Occupational and Environmental Medicine and suggests that replacing the traditional workstation with treadmill desks cannot reverse the ill effects of a sedentary lifestyle. Treadmill desks can help overweight or obese office workers get out of their chairs and get moving, but the physical activity was too small to offer as much benefits as daily exercise can.

Experts carried out the study for 12-weeks targeting overweight and obese office workers with continuous desk work. About 40 employees participated in it, with half of them using treadmills and the other half serving as a control group for comparison. The results showed that workers who used the desks increased their average number of daily steps by more than 1,000, but did not record any significant weight loss or changes in Body Mass Index (BMI). The employees only used the treadmills about half the time they were asked to, averaging one session and 45 minutes a day on the machines, Schuna said.

Treadmill desks have been gaining popularity as a solution for sedentary workers to get out of their desk chairs during the work day. However, it's their long-term efficiency that has been questioned lately. A previous study that analysed the prospective benefits of using a walking workstation and claimed that it helps in promoting short-term physical and psychological wellbeing. "Even if you don't exercise or if you are overweight, you'll experience both short-term physical and psychological benefits", said Michael Sliter from the Indiana University-Purdue University Indianapolis. The long-term benefits that such workstations can provide is something that stands debatable and also whether the same can compete with the benefit that regular physical training or other forms of physical activities can provide.