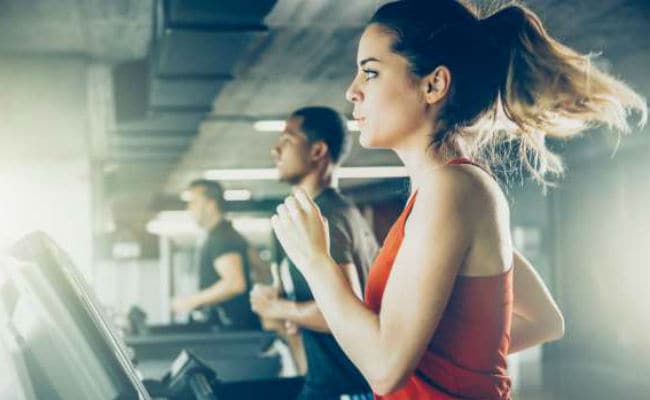 Promoted
Listen to the latest songs, only on JioSaavn.com
While you're working on your fitness resolutions, let's clear up a few misconceptions:

- Your weight will fluctuate, even after hitting that feel-good goal. It happens to everyone, even elite athletes.
- At some point, you will hit a plateau.
- Your running pace will regress after initial gains.
- You will get stuck on a weight-lifting benchmark.

None of this means your work is done and you should quit. In fact, it means the work is just beginning.

Many people who accomplish short-term goals get a rush of achievement in the moment but don't create the behavioral changes needed to maintain and improve, said Tom Raedeke, a professor of kinesiology at East Carolina University who specializes in exercise psychology. "Somehow, we have to help people go beyond . . . just meeting the New Year's resolutions or just accomplishing this goal," Raedeke said.

Instead he wants people to envision a journey to good health - complete with numerous peaks and valleys. That means being mentally and emotionally prepared and having behaviors in place to deal with the myriad changes and challenges that come even after the finish line. It's not about goals or measurements but rather establishing the right mind-set to change your life for the better.

The main difference between an average adult and a high-level athlete isn't a lack of talent or willpower but rather a lack of a system.

Sam Zizzi, professor of exercise and sports psychology at West Virginia University, points out that athletes succeed because of the infrastructure created for them: coaches and trainers, set practice times, and a methodical approach to nutrition.

All that's left for them is to, well, just do it.

The vast majority of adults, however, do not have that in place.

"We're competing with a wide variety of priorities, and things kind of get lost in the mix," Zizzi said. Individuals have to either make their fitness goals a top priority and pivot their life to accommodate that goal, or merge a goal with something or someone that already is a top priority.

"There's not this coherent goal where everyone is on board with you walking 10,000 steps a day," Zizzi said. "You have to put the structure in place. You have to hold yourself accountable."

Creating that structure takes accountability and support, something Evan Hakalir is building for himself. Hakalir, a 35-year-old New Yorker, lost 70 pounds in his early 20s and was physically active. During the Great Recession, he lost his real estate equity job and decided to start a new children's clothing line, Andy &amp; Evan, with his partner.

In the midst of traveling and working 20-hour days, Hakalir gained back about 40 pounds. The seesaw of losing and regaining weight continued until a year ago, when his daughter was about to be born.

"With a baby on the way, I felt, 'Oh my God, this has gotten out of control,' " Hakalir said. "So instead of buying the larger suit size, I decided to recommit myself to being fit."

To keep himself accountable, Hakalir joined Weight Watchers. Wanting to use the in-person weigh-ins (and the embarrassment of a bad weigh-in) as initial motivation, he's instead found a supportive environment.

"What I actually found were nice, like-minded people of all shapes and sizes who were on this journey. Some were much thinner than I ever was, and some were heavier. They all were on this lifelong struggle of staying healthy and fit," Hakalir said.

Zizzi said making a plan is key. He encourages his clients to have a Plan A and a Plan B so they are prepared when life intervenes.

Raedeke recommends that individuals focus on planning an activity with details a reporter wants to know: the who, what, when, where and how. Instead of saying, "I want to walk more," make a plan: "I will walk one mile every Monday and Wednesday at 1 p.m. with my co-worker."

An action plan shifts the "Why?" from the outcome to the process.Just as in other areas of life, competency is a key marker when it comes to long-term health. "People are very good at their jobs and feel good and competent as a parent, but they don't feel competent as a healthy person," Zizzi said. "We invest and take time to do things we are good at."

With his clients, Raedeke starts by finding out whether they have been successful in making a change in the past. "If you have, what things helped? Then, I know right away I can build on what's worked for them in the past. It can be something unrelated to diet, but what worked for them may work for diet and exercise," Raedeke said.

To keep the momentum going, you have to be dedicated to educating yourself (perhaps taking a healthful-cooking class or hiring a personal trainer) and to experimenting.

Alice Williams, a Salt Lake City-based communications professional, said she feels confident in her ability to live healthfully in large part because of her self-education on what fitness activities and nutrition work best for her. She documents what she's learned on her blog, honestlyfitness.com.

"Even when I first started out in my journey, I've had confidence to try things. I started out with workout videos, and now I have more of an idea about what I can do," Williams said. "And I had a personal trainer a few years ago, and it was extremely helpful to get me comfortable with the gym."

When the weight fluctuates or the running pace slows, people often get discouraged and give up or overcompensate in training, which can lead to burnout and injury. Self-sabotage is the pathway to undercutting confidence. Raedeke said individuals start viewing the regression "as a failure and also a reflection of their underlying ability versus it's just a process."

Understanding the science and psychology behind fitness regression and plateaus - even understanding that plateauing is a natural component of getting stronger and faster - can save a person a lot of frustration.

Experimentation not only combats boredom but also allows short-term goals to grow into long-term behavior. Williams said her goals evolved from losing weight to being healthier to becoming stronger, an activity Williams said is particularly hard for women.

Women are "fine doing a group fitness class but shy away from lifting weights, and I've heard so many say, 'I want to get into weights, but I don't know how. I'm too embarrassed.' That's frustrating for me," Williams said.

CommentsIn 2012, Mike Stollenwerk, a Philadelphia-based chef, made the decision to get healthy.

On a friend's advice, he took up the martial arts discipline of muay thai. "The first month was hard because you don't see results right away," Stollenwerk said. "I couldn't do a push-up, I couldn't do a pull-up, I couldn't jump rope. I was really out of shape. After the first two to three months, I started seeing results. I lost 10 pounds. It was getting exciting."

In a year, Stollenwerk lost 160 pounds and was going to muay thai five days a week. But life intervened: He was in the process of opening a new restaurant in Philadelphia, which consumed the majority of his time and disrupted his eating schedule of six small meals a day.

Stollenwerk had to cut back on his hobby because it didn't fit his schedule. As a supplement, he took up hot yoga because it "keeps the chi correct and keeps you feeling good." It also fit his schedule; he goes to hot yoga at 6 a.m., then goes to work. Now that the restaurant, 26 North, is up and running, he's looking forward to working more muay thai back into his weekly routine.

A sense of enjoyment is key to staying motivated for the long haul, Raedeke said. "If they can grit through it for a week or two, that's not a lifestyle change."

Ultimately, the goal of living healthfully is to find meaning and to embrace, rather than fight, all the peaks and valleys.

"In the process, there's going to be natural fluctuations, and it's part of the journey," Raedeke said. "And the delicate nature is how to help people find meaning in the process of change, not just the outcome."