International Experts: Yoga Can be Good for Your Heart 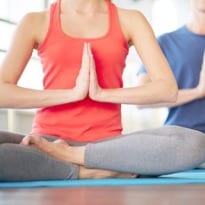 In modern times, heart disease has become more of a lifestyle concern where either people don't have time or luxury tends to make them lazy. That said, there has also been enough evidence to prove that exercise in any form is great to boost your physical and mental health and especially heart health. A latest study published in the European Journal of Preventive Cardiology throws the spotlight on the benefits of practicing yoga.

Yoga is a physical, mental and spiritual practice that aims to transform your mind, body and energy. It is known to have originated in India back in the Pre-Vedic period. It is believed that Indian gurus introduced it to the Western countries. According to this new study conducted by Harvard experts, yoga can be as effective as cycling or brisk walking in reducing the risk of a heart attack or stroke. It has been found to be beneficial in managing and improving the risk factors associated with cardiovascular disease and can be a 'potentially effective therapy' for cardiovascular health. (Are You Breathing the Right Way?)

Following a systematic review of 37 randomised controlled trials (which included 2,768 subjects), researchers could conclude that yoga may provide the same benefits in risk factor reduction as traditional physical activities such as biking or brisk walking. "This finding are significant as individuals who cannot or prefer not to perform traditional aerobic exercises might still achieve similar benefits in (cardiovascular) risk reduction," the team said. The investigators noted that this might be because of yoga's impact on stress reduction, "leading to positive impacts on neuroendocrine status, metabolic and cardio-vagal function". (Mindful Meditation Helps Lower Blood Pressure)There were also significant changes in secondary endpoints like body weight, diastolic blood pressure, total cholesterol and heart rate. In comparison to not exercising at all, yoga was associated with significant improvement in primary outcome risk factors like body mass index, systolic blood pressure, low-density (bad) cholesterol and high-density (good) cholesterol. However, no improvements were found in parameters of diabetes. (The Weirdest Fitness Trends of 2015)

"These results indicate that yoga is potentially very useful and, in my view, worth pursuing as a risk improvement practice," said senior author professor Myriam Hunink from Erasmus University Medical Center, Rotterdam, and Harvard School of Public Health, Boston.

Listen to the latest songs, only on JioSaavn.com
The evidence from this study also supports yoga's acceptability for 'patients with lower physical tolerance like those with pre-existing cardiac conditions, the elderly, or those with musculoskeletal or joint pain'. Experts are of the opinion that the yoga is an easy and low cost tool that can help in managing heart health.