Is Eating At Night Making You Gain Weight?

late meal consumption leads to health issues like weight gain, altered cholesterol levels, et al. If you have been eating away to glory at night, probably it is time you stop. Here's why 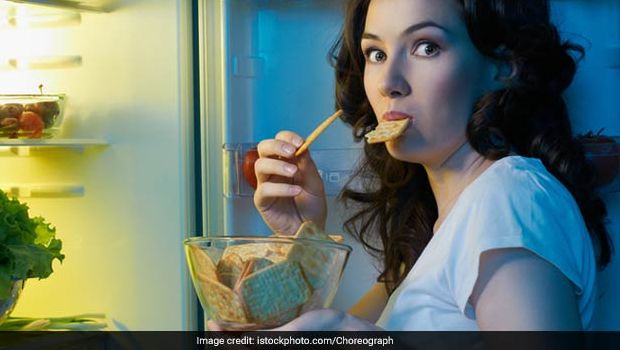 Health experts have touted breakfast as the most important meal; on the other hand, lunch and dinner have to be the lightest. It is said that your metabolic rate in the morning is the highest as compared to later in the day. In fact, eating late at night has been associated with weight gain. According to a study published in the journal Cell Press Selections, late meal consumption leads to health issues like weight gain, altered cholesterol levels, et al. If you have been eating away to glory at night, probably it is time you stop. Here's why?

There are times when we have dinner late at night or give in to our hunger pangs making us eat more. Basically, we all load up on excess calories by eating heavy foods. According to Dr. Zamurrud Patel, Consultant Dietician, Global Hospitals Mumbai, "Our bodies are accustomed to process food most efficiently when it's eaten during daylight hours. That means eating at night, compared with eating calorically equivalent meals during the day, may cause people to gain weight. The number of calories you should eat at dinner depends on your total daily calorie needs, as well as how much you eat at other meals. Estimated calorie needs range from 1,800 to 3,000 per day. If you need 2000 calories per day and you eat two snacks, subtract 100 calories for each, and that leaves you with 1800 calories. One way to plan your calorie intake at breakfast, lunch and dinner is to divide this number evenly into three meals, giving you 450-650 calories to spend on dinner."

According to Macrobiotic nutritionist and Health Practitioner, Shilpa Arora ND, "No food should be consumed late at night. Ideally, one should practice a three hour gap between meals and sleep time for a healthy body and weight loss."

Generally, it is said that one shouldn't eat at night because at this point your metabolism slows down significantly, which reduces the chances of burning of calories you consume at night. While your metabolism never stops working even when you are sleeping, it does not work the way it should ideally, which leaves you adding up to the fat, leading to weight gain.

So, it is best to eat food at least two to three hours before going to sleep or eat light calorie foods that can be digested easily. Eat healthy and stay healthy!