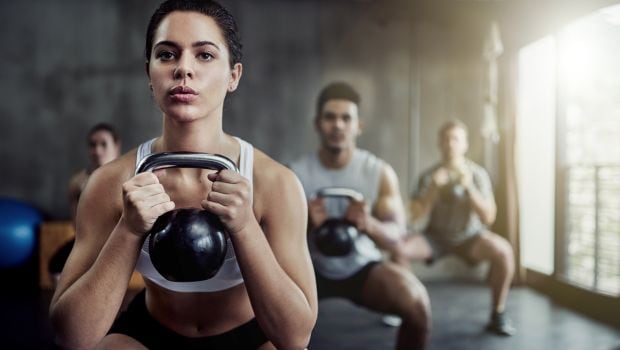 Highlights
Kettlebell workout has been around since 1700s when the Russian villagers would use it to display their strength and talent other than weighing crops. Now, in modern gyms, it is used as a tool or an equipment to build flexibility, cardio and strength. Apart from that it helps you tighten your grip, strengthening your shoulders, arms and wrists. If performed rightly, the kettlebell workout can be really effective. It has been said by trainers that it's the most effective exercise for those on a tight schedule. So how different is it from dumbbells? Dumbbells divide the mass on both the ends but the kettlebell is one cannon-looking ball with a handle at the centre of the mass. It is also called Indian clubs or ishi sashi, the Japanese hand weight equipment that is mainly used in martial arts.

The weight of the kettlebell has to be chosen carefully according to one's strength and fitness, which varies from person to person and men and women. Broadly, 8Kg-16Kg is considered to be appropriate weights from women and 16Kg-24Kg for men.

How to Perform Kettlebell Workouts

Here are few of the exercises a beginner can perform with kettlebell:

It's a good start since it's the foundation of ballistic exercise and because it later helps with other kettlebell exercises like goblet squads, deadlifts and other lifts. The swing targets one's hips, glutes, shoulders and legs. Stand tall with legs apart holding the kettlebell with both hands. Bend you knees a little and swing the tool with your back and arms absolutely straight.

The simple rotation exercise that doesn't require a lot of movement targets your shoulder, biceps and arms. Stand with feet a little apart. Hold the kettlebell upside down by gripping the Ls of the handle or the horns of it tightly and revolve the kettlebell around your shoulder, from behind the head clockwise and anticlockwise. This is the shoulder halo. Then move the kettlebell around your hip without inverting it, by simply revolving it from one hand to the other slowly but continuously, which is the hip halo.

Single or double arm row targets and tones the shoulder, arms and the back the most. It's one of the simplest and effective exercises as per trainers. Stand tall with feet slightly apart. Bend the knees just a little and pick up the kettlebell pulling it up near the stomach and hold, keeping elbow close to the body while doing so. The exercise can be performed with single equipment or two concurrently.

This exercise will tone and build the huge traps (the portion of the body between your neck and shoulder) along with triceps, arms and shoulders. Place the kettlebell between the forearm and shoulder of one arm and push it up and straighten the arm. Repeat this 12-15 times for each arm for best results.

Stand with feet shoulder length apart. Hold the kettlebell either near the chest supporting it from underneath or hold the handle with both hands and arms stretched out at eye level. With the back straight, squat down to the floor bending your knees. Go as low as you can and come back up. The squats target the back, the leg and the glutes.

Stand tall with feet apart, and the kettlebell at the centre. Bend down to hold the kettlebell handle with both hand and pull it up with extended arms and straight back. Deadlifts if done correctly will give you a flatter stomach and help build abs. They also target legs, arms, back and glutes.