Snack on These to Burn Belly Fat! 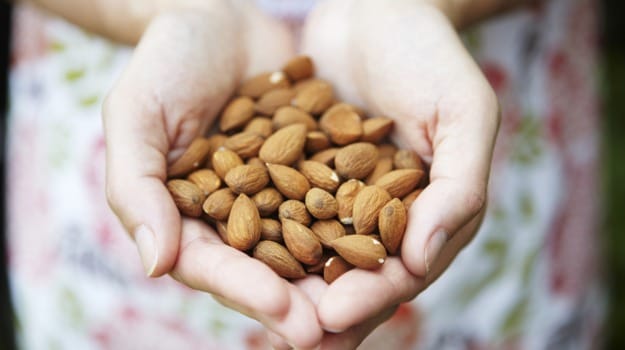 One of the most common causes of a failed diet regime is a sudden snack attack. Untimely cravings can not only ruin your fitness dreams but also leave you with those extra calories. Now, here's a piece of good news. Scientists from Penn State University suggest that including almonds in your daily diet could help reduce belly fat and also the risk of heart disease.
According to Lead Researcher Claire Berryman, "Our research found that substituting almonds for a high-carbohydrate snack improved numerous heart health risk factors, including the new finding that eating almonds reduced belly fat.
(20 Minutes of this Can Reduce Stubborn Belly Fat)
The twelve-week, randomized and controlled clinical study, was conducted in 52 overweight, middle-aged adults who had high total and LDL (low-density lipoprotein) or "bad" cholesterol but were otherwise healthy.
Participants ate cholesterol-lowering diets that were identical except that one group was given a daily snack of 42 grams of whole natural almonds, while the other group was given a banana muffin that provided the same number of calories. They were provided all meals and snacks in amounts based on their calorie needs to maintain body weight. Further, each diet was followed for a period of six weeks.
The results showed that the diet containing the almond snack helped in decreasing abdominal fat, total cholesterol, LDL-cholesterol and other blood fats. On the contrary, the diet with the muffin snack reduced HDL (good) cholesterol more than the almond diet.
(Big Belly, Bigger Heart Risk)
Scientists concluded that a daily dose of 1.5 ounces or 42 grams of almonds eaten instead of high-carb snacks may improve a number of risk factors related to heart disease and at the same time help in curbing abdominal obesity. The study appeared in the Journal of the American Heart Association. Previous research indicates that almonds, being a great source of protein, helps in satiating your appetite. Moverever, they are rich in monounsaturated fats, a type of fat that has been linked with reduced risk of heart disease.
With inputs from IANS
For the latest food news, health tips and recipes, like us on Facebook or follow us on Twitter and YouTube.
Tags:  Belly FatAlmondsHeart DiseaseAbdominal ObesityPenn State UniversityAmerican Heart AssociationClaire Berryman