The Protein Problem: Why Eating Too Much Chicken Might not Help Your Diet 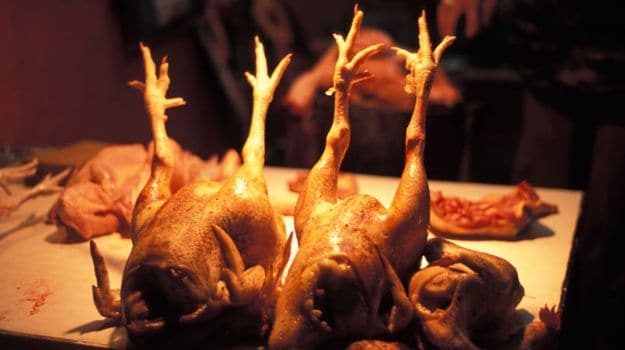 Chicken, often seen as a healthier alternative to red meat, has been associated with health concerns from consuming excess protein. Photograph: Alamy

A favourite of health-conscious eaters as well as junk food fans, chicken is taking over our diets in the US and Europe – but at what cost?

When it comes to diet, many health-conscious consumers have come to the conclusion that protein is king. Specifically: chicken. Diet trends, such as the recently debunked Paleo diet, have overstated the importance of eating a lot of meat. At the same time, consumers have been put off red meat by its associated health and environmental concerns. This has led to consumers increasingly eating more chicken instead.

The global appetite for chicken is growing so large that health and environmental experts say we're creating an excess protein problem, with damaging consequences for our planet and no additional health benefits for us.

"There is this perception that protein is good for your health, but I am not sure where that has come from," says Modi Mwatsama, director of global health at the UK Health Forum. "It's certainly a good marketing ploy."

Protein is a key part of a healthy diet " but the US Food and Drug Administration (FDA) recommends a daily intake of 50g of protein for adults, not the 75g some people in the US and Europe are estimated to be eating.

The problem is being exacerbated by the limited range of proteins we eat, according to Duncan Williamson, food advisor at WWF, the conservation NGO. "Some people don't realize you can get protein from plants and fish," he says. "We need to eat less protein from a greater variety of sources."

Globally, chicken meat is expected to account for almost half of the increase in global meat production over the next decade, according to the Organisation for Economic Co-operation and Development (OECD), as it surges past pork as the world's most popular meat by 2020.

Chicken also accounts for around half of all meat intake in the US and UK, up from one third in the early 1990s.

And in what could be seen as a generational shift, poultry farmers are predicting per capita consumption of white meat in the US will overtake red meat for the first time on record this year. This has been helped by comparatively slower price increases for white meat (pdf) over the past decade.

Every year, around 52 billion chickens are slaughtered globally for meat, a figure that will double if consumption in India and China catches up with the west. And while scientists have found intensive chicken farming to be the "least bad" option in environmental terms compared to cattle, that only tells half the story.

In terms of the meat itself, chicken can be a low saturated fat alternative to red meat if you don't eat the skin and fat and avoid frying. But with UK and US adults already eating 40-50% more protein than needed, on average, there are concerns about the health impact of our growing appetite for chicken, according to Mwatsama.

"Increasingly, we are seeing foods labelled as a source of protein, as if we should consider that to be a good thing," Mwatsama says. "Yet for the last 20 years or more, people have not been deficient in protein in the developed world."

As well as producing no additional health benefit, Mwatsama says those sticking to high protein diets such as the Atkins or Paleo diet are risking long term health problems. Following a high protein diet in the long term may increase the risk of colonic disease, while low carbohydrate-high protein diets have also been associated with higher mortality from cardiovascular diseases.

There is this perception that protein is good for your health, but I am not sure where that has come from.

Rather the upping our chicken consumption, Mwatsama advises people to switch to healthier sources of protein with low or no saturated fats, such as pulses, beans, lentils, chickpeas and buckwheat, which also provide a good source of fibre.

Chicks reared in less than 40 days required less animal feed (which in the case of Europe includes imported soya linked to deforestation in South America) and produce less waste and greenhouse gas emissions per kilogram of meat than lamb or beef (see this graphic comparing environmental footprint of meats). However, emissions are still far higher than vegetable protein alternatives.

"From the standpoint of climate change, plant-based diets win every time," says Marion Nestle, professor of nutrition and public health at New York University. "Plants have plenty of protein and the protein is high enough in quality as long as the foods are varied " combining beans and rice, for example. All of the major concerns about diets " greenhouse gases, environmental degradation, treatment of animals and human health " all get taken care of by diets that are largely, if not exclusively, plant-based."

By cutting back on red meat in favour of ramping up on poultry, we are not resolving the heavy resource use in terms of water, land and greenhouse gas emissions of our meat intake. What's more, UN scientists suggest that if the rest of the world catches up with European and North American levels of protein consumption, we may not have enough crops, land and water to feed all the necessary livestock.

There's also the question of animal welfare, Nestle points out, and how comfortable people feel about eating the majority of their meat from animals reared exclusively indoors.

It is these conditions, suggest animal welfare campaigners, that have made chicken such a risk for the spread of zoonotic diseases, such as avian influenza, salmonella and campylobacter, as well as antimicrobial resistance with poultry farming heavily reliant on antibiotics to treat and prevent illness spreading amongst the flock. Campylobacter, which is endemic in poultry, is the source of 280,000 cases of food poisoning each year in the UK and more than 1.3m estimated cases in the US.

Related: Meat industry has a cow over US dietary guidelines

Getting people to switch from meat protein to buckwheat is far from straightforward. Some nutritionists argue a better approach would be to reformulate packaged meals, of which sales are soaring.

"I don't think we're going to get people to go out and buy buckwheat," says Dr Wendy Russell from the Rowett Research Institute of Nutrition and Health.

"But we can replace a large proportion of the beef in lasagne ready meals or rusk in sausages with buckwheat without the taste being affected."

This article was updated on 20 August. A previous version of this article said that every month " rather than year " around 52 billion chickens are slaughtered globally for meat.