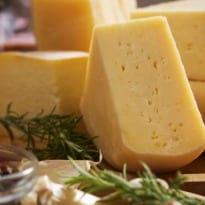 Cheese! Glorious cheese! Think cheese and you can imagine cheese with crackers, melted cheese on pizzas, boiled vegetables with layers of cheese, a ham and cheese sandwich - the possibilities are endless. Cheese is the one thing, which is used worldwide and is loved by over half the world's population. Did you know that cheese fans maybe out number Swiss Chocolate fans? And that most cuisines in the world would be incomplete without cheese!

The origins of cheese has not been documented. One does not know where or when it came into existence, but the farmers of Mesopotamia, who first domesticated goats and sheep certainly made their cheese from milk. There is a story-around 9000 years ago; an Arabian merchant was riding on a camel through the desert. He had brought with him a bag of skin that was filled with goat milk. When he opened the bag to drink the milk, he found that the milk had converted to cheese! Apparently, the heat and rocking motion of the camel had turned the milk into solid cheese and whey.

Though cheese is primarily made of cow's milk but in certain parts of Europe and the Middle East, it is also made of goat's milk. Other sources for making cheese are the milk of yak (China), buffalo (Philippines, India and Italy) and even from donkey and horse's milk in Afghanistan and Iran.

Cottage Cheese: A lumpy and bland curd cheese, usually containing cream, has a moist texture. It is available in most countries and is used mainly for making cheesecakes and salads. In India, cottage cheese is very commonly used in most houses and goes by the name of 'paneer'.

Cream Cheese: This cheese is prepared in the same way that cottage cheese is made but only from full-cream cow's milk. There are different types of Cream Cheeses- they could be double cream cheese and singles cream cheese. White and smooth, cream cheese is usually used for snacking and spreading.

Curd Cheese: 'Curd' is the general name given to all un-ripened cheeses made from the separated curds of cow's or goat's milk. Curd cheese has a slight acidic taste and is used in the preparation of sweets and savory fillings. It is also used to make dips and spreads and is available in most countries easily.

Brie: This is a soft French Cheese made from cow's milk. It has a creamy, sometimes runny texture, mild yet robust flavor. It is used to make snacks and salads.

Camembert: This French cheese is made of cow's milk and has a very distinctive taste that changes from mild to pungent as it ages. This cheese is famous as a dessert and a snack cheese.

Mozzarella: This Italian un-ripened curd cheese was originally made from buffalo milk but now is made from cow's milk as well. This is an extremely soft cheese with a chewy texture and has a mild and creamy taste. This cheese is used primarily to make pizzas, lasagne and grilled sandwiches.

Ricotta: Another Italian un-ripened cheese made from the whey of cows milk. This cheese is very smooth and has a milky taste and is used for the preparation of sweets and savory dishes as well as for making pizzas.

Roule: A soft French cheese flavored with herbs and is rolled up like a Swiss roll.

Manchego: This is Spain's most famous cheese and is made of sheep's milk and has a creamy, yet firm-textured interior. This cheese has a very strong taste and is ideal for snacks.

Cantal: This cheese is often referred to as French Cheddar. It has a very fine flavor and aroma and is usually used as an alternative for cheddar cheese as it melts very easily.

Cheshire: An English specialty made of cow's milk with a crumbly texture and a salty ting. This cheese ripens at a fast rate. Cheshire cheese is available in two varieties- Red Cheshire and White Cheshire. It makes a very good snack cheese.

Emmental: This world famous Swiss cheese is made of cow milk and has a slight sweet and nutty taste. It is usually used as a base for fondues and toasted snacks.

Dunlop: This is a Scottish cheese, made of cow's milk with a bland and buttery taste. It is an ideal snack cheese and is good for toasting.

Gruyere: This is a Swiss cheese but variations are produced in France and Switzerland. It has a smooth and uniform paste with a few pea-sized holes and a dark brown rind. It is a good table cheese and is used to make fondues, sauces and quiches.

Cheddar: This cheese by far is England's most famous. Made from cow's milk, it varies from mild to very sharp. Cheddar cheese is used mostly for cooking and also made for making sauces, souffles, salads and pizzas.

Edam: Semi soft to hard texture, with small holes, Edam has a mild and sometimes a nutty flavor.

Parmesan: An Italian cheese with a grainy texture and a golden color, it is made of finely cut and carefully separated curd, which then is stirred and scalded before being pressed. It has a sharp and salty flavor. Parmesan cheeses are used for Italian cooking.

Sapsago: A Swiss cheese made from sour and skimmed milk, is also known as green cheese because of its pale green color.

Smoked Emmental: This cheese is traditionally made in a long sausage like shape and is used often as a snack cheese.

Mycella: A Danish cheese that's made from cow's milk and has blue-green streaks. It's a relatively mild blue cheese, and is usually used as a table cheese but can also be used in salads and salad dressings.

Danish Blue: Danablu or Danish Blue is made from homogenized cow's milk. This cheese is creamy and soft textured and has a very strong taste. It makes a very good dessert cheese.

Blue Cheshire: A cylindrical and blue version of the Cheshire and the finest of all blue cheeses, this is made from cow milk and ripens and turns blue 'accidentally'. With a very rich taste, it is best used as a dessert cheese.

Bavarian Blue: A double creamed, soft and blue-veined cheese with a mildly sour taste, it is best used in sandwiches as a spread.


How to store cheese:

Once you've brought the cheese home, leave it in its original packaging and tightly cover it in plastic wrap. This reduces air circulation, which in turn reduces the possibility of mold. Store the cheese in the coldest part of your refrigerator - not on the door.

You can freeze hard cheese like cheddar, but let it thaw out in the refrigerator for 24 hours before use. Rapid thawing causes a breakdown between the moisture and oils in the cheese. It's best just to buy what you need for each week or two.

Promoted
Listen to the latest songs, only on JioSaavn.com
Cheese is more flavorful at room temperature. Let it stand for a half hour before serving.

Cheese will continue to ripen, no matter how carefully it is stored. Hard cheeses will generally keep for several months, whereas softer cheeses will keep from one to three weeks after opening, if stored in an airtight container.

CommentsShredded cheese is more prone to mold because it has more exposed surface area. Try to use shredded cheese within a few days.