Believe It Or Not: Family Finds Whopping 51kg Jackfruit In Backyard, Sends It For Guinness World Records

A family in Kollam, Kerala was taken by surprise when they spotted a humongous jackfruit growing in their backyard weighing a whopping 51 kilograms. 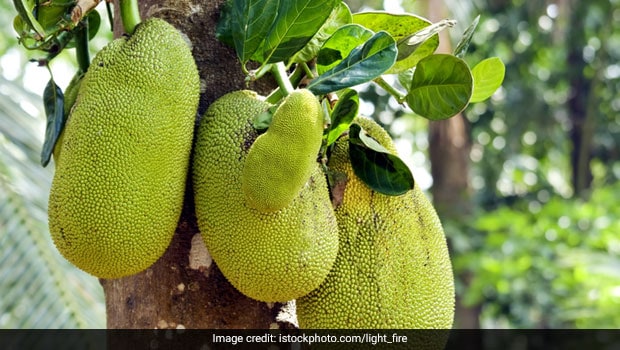 Giant Jackfruit was found in this Kerala family's backyard.

In the lockdown days, everyone is trying to make the best of what is easily available at home. Growing fruits, vegetables and herbs in the kitchen garden is a practice that is becoming increasingly popular. A family in Kollam, Kerala was taken by surprise when they spotted a humongous jackfruit growing in their backyard. On weighing, the family found that the gigantic vegetable actually weighed more than a whopping 51 kilograms!

The family, belonging to the Edamulakkal village in Kollam, Kerala, were surprised to find the mammoth fruit growing in their backyard. According to reports, the family has now approached Guinness World Records with their entry. The Guinness World Records lists the world records of human achievements and the extremes of the natural world. The current world record in the Guiness Book for the heaviest jackfruit is 42.7kg, and the one they found weight over 51.4kg and is almost 97cm in length.

#WATCH via ANI Multimedia: A family in Kollam's Edamulackal claims that a jackfruit weighing 51.4 kg has grown in their backyard and that they have applied for Guinness Record. #Keralahttps://t.co/M6vOMQiaSP

(Also Read: Neither Mutton Nor Chicken, 'Kathal' Prices Skyrocket Due To Coronavirus Scare)

John Kutty from Edamulakkal said to ANI, "When I searched, I found that the heaviest jackfruit weighs 42.72 kg and was found in Pune. So, I have applied for Guinness World Records and also the Limca Book of Records."

Jackfruit or Kathal has been at the forefront of the news in recent times as well. A report suggested that in the times of spread of Coronavirus, people are switching to kathal as a viable alternative to meats such as chicken or mutton due to the rumour that the virus could spread through meat as well. This was showing up in the surge in prices of the humble vegetable kathal, which surged up to 120% in March 2020. The Kathal has a meaty texture, thus making it a viable vegetarian alternative for traditional meat-lovers.