Amarnath Chats which is a street-food stall from Bengaluru created a new fusion food out of the humble South Indian dish, combining it with ice cream. 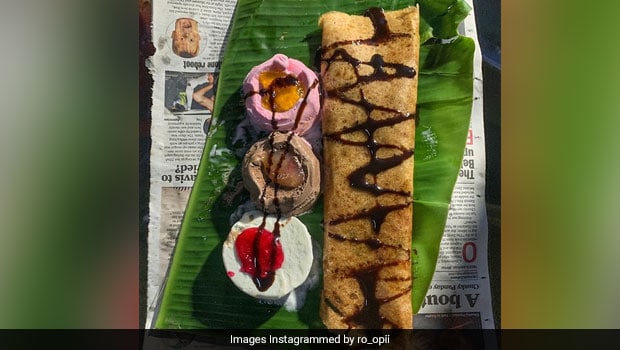 Ice cream with dosa makes for an interesting new combination.

From chocolate panipuri to dal makhani fondue, fusion foods are found aplenty everywhere we go. Hate them or love them, you can't ignore them. The most innovative of fusion foods are found in the most unlikely of corners. Street food owners are willing to experiment with all sorts of dishes and combinations to draw customers, and subsequently, eyeballs on social media. One such dosa-stall Amarnath Chats from Bengaluru created a new fusion food out of the humble South Indian dish.

While chocolate dosa is still commonplace and can be easily found, stall owner Manjunath upped his street food game a notch and tried to invent a new ice cream dosa.The dosa is cooked with options of ice-cream being slathered on the dosa, or as separate scoops alongside the dish. It is further doused in chocolate sauce before being served to the customers. Businessman Anand Mahindra tried it and shared the video of the unique preparation on his Twitter handle, giving the stall-owner 'full marks' for innovation. Take a look:

Not a fan of ice cream dosas, but full marks to this gentleman's inventiveness. In fact Indian street vendors are an inexhaustible source of innovation. All the product design teams in our Group should regularly visit vendors & draw inspiration from them! #whatsappwonderboxpic.twitter.com/G65jg70Oq5

"Not a fan of ice cream dosas, but full marks to this gentleman's inventiveness. In fact Indian street vendors are an inexhaustible source of innovation. All the product design teams in our group should regularly visit vendors & draw inspiration from them! #whatsappwonderbox," wrote Anand Mahindra, sharing the video on social media.

The stall is known for not just ice cream dosa but ice-cream idlis too. Twitterati gave mixed responses to the interesting twist to the dosa, with some users saying that it looked yummy while others couldn't digest the thought of such an abomination. One user said that it was an 'Indian preparation of waffle' whereas another user said that it was a 'blasphemy' to make a preparation as weird and eccentric as an ice-cream dosa. Take a look at some of the reactions:

Seriously ??!! Dosa with ice cream
It's more of stupidity than innovation.

I'm sure it's popular with north Indians, anything for the sweet tooth

Indian version of waffles... Loved the concept...thanks for sharing it @anandmahindra

Promoted
Listen to the latest songs, only on JioSaavn.com
— Nidhi Sharma (@pedestrianwoman) February 20, 2020

being a madrasi this is pure horror. how can dosa and ice cream even be on same line, leave alone together?

As Twitter remained a divided house on the success or failure of the ice cream dosa, we can definitely say that the idea of combining the two unrelated members of the food family was indeed an intriguing one. Fusion foods are a vast space with enough room for creativity, and who knows what may end up being invented next?