Viral video: A food stall in Gujarat selling ice-cream vada pav has taken the art of 'strange food combination' to another level, and we just can't decide to like it or not. 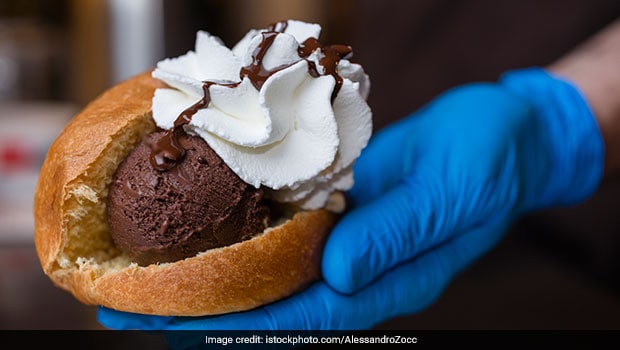 The video of ice cream vada pav has gone viral.

The year 2020 saw several weird food combinations that people whipped up just for fun or to genuinely explore creativity in the kitchen. From gulab jamun pancake to noodle pani puri, we saw our favourite Indian foods getting mangled, and like how! Just when we thought we couldn't take it anymore, another shock came our way. A food stall in Gujarat selling ice-cream vada pav has taken the art of 'strange food combination' to another level, and we just can't decide to like it or not. But, it has definitely got our attention.

Amusing as it may be, giving a sweet spin to the iconic Mumbai street food of vada pav is overreaching, even for food crusaders like us. But, full marks for the novel idea that has got the internet buzzing with divided opinions.

(Also Read: Food Combinations That Are Making The Internet Cringe)

Twitter user Sahil Adhikaari posted the viral video in which a food stall owner in Gujarat stuffs in a scoop of ice-cream instead of vada inside the pav (buns) and tops it with flavoured liquid that is otherwise used to colour and flavour ice gola, and also decorated it with raisins. The caption read - "Gujarat's answer to Vada Pav is here. Vada Pav in mud".

Of course, there were detractors too who outrightly snubbed the whole idea of destroying their favourite vada pav. Many of them were left wondering with 'just  one question - why?!" Another user linked the vada pav situation to the prevalent times and wrote - "2020 continues".

What do you think of this bizarre fusion food innovation? Yay or nay?