Opening batsman Rohit Sharma is enjoying quality time with his family and friends while he recovers from his injury, and also some delicious food. 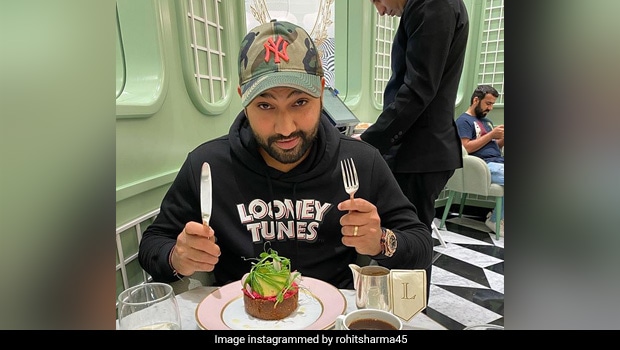 Rohit Sharma and Ritika Sajdeh enjoyed some delicious food in their recent outing.

Cricket is the pulse of the nation, and an injury sustained by a key player may make or break the match's winning predictions. Rohit Sharma is one such sportsperson whose innings have often proved lucky for the Indian cricket team's batting innings. He backed out from the Indian cricket team's remaining tour of New Zealand after he sustained a calf injury. The opening batsman is now seen enjoying some quality time with his family and friends while he heals. A recent post that the ace batsman shared on his profile has him devouring some delicious food. See pic here:

Rohit Sharma was seen having toast loaded with what looked like mashed beetroot and egg. He looked in the mood for food, as he posed with a fork and knife in his hand. His toast was accompanied with some delicious black coffee. He was wearing a black sweatshirt that said 'Looney Tunes', and he thanked his wife Ritika Sajdeh for the click. His fans and followers began to comment on the picture, wishing him to get well soon and return to the field.

Rohit Sharma is quite the foodie, as can be seen from his other Instagram posts as well. When the team won a match on January 26, he posted pictures of the team with the caption, "What a game. Great series win for the team. Shami bhai aaj toh Biryani banti hai." Another post on Rohit Sharma's profile showed a picture of himself and Ritika Sajdeh having a lunch date. "Lunch date with my favourite at our favourite restaurant in Mumbai," wrote Rohit Sharma in the caption. See the posts here:

We wish Rohit Sharma a speedy recovery, and hope to see more such glimpses of his foodie side!