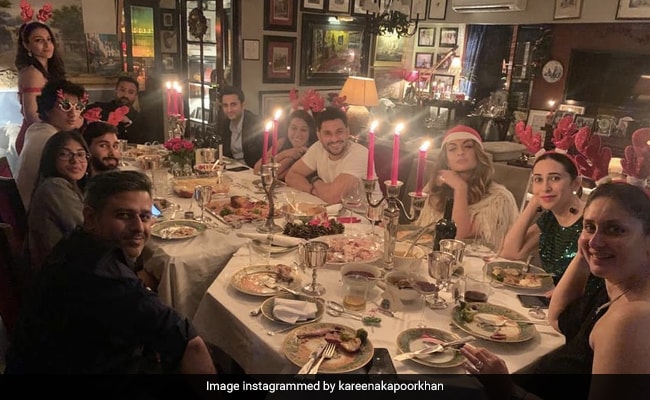 'tis the season to indulge and make merry, and if you are still hunting for ideas how about taking a cue from your favourite stars? Actress Kareena Kapoor Khan and actor Saif Ali Khan were joined by Soha Ali Khan, Kunal Kemmu, Karisma Kapoor, Ibrahim Khan, Samaira Kapoor Adar Poonawalla and a bunch of other guests for a traditional Christmas feast. Kareena took to Instagram to post a picture of the merry gathering and we cannot take our eyes off the impeccably done table. With candelabra, goblets, flowers, and shiny cutlery, the setting looked every bit festive. The guests indulged in the dinner wearing their Santa caps and reindeer headgears.

The menu comprised most traditional Christmas staples - roasted red meat, turkey, mashed potatoes, spinach salad, brussels sprouts. In Soha Ali Khan's Instagram story we also got a peek into the desserts of this exquisite spread. A flambeed chocolate cake, which she captioned as "It's lit", and another creamy, chocolat-y cake topped with berries were two of them.

Saif and Kareena came back to Mumbai from Dharamshala only a few weeks back. Saif was shooting for his upcoming movie 'Bhoot Police' with Arjun Kapoor in Himachal Pradesh, where Kareena also decided to join him. Kareena who is expecting her second child soon, also wrapped the shoot of 'Laal Singh Chaddha' earlier this year. The film is set to release in the coming year, and marks the reunion Kareena Kapoor and Aamir Khan.