Pizza With A Cause: This US-Based Pizzeria Encourages Dog Adoption With A Heart-Warming Campaign

The campaign by the pizzeria also includes a provision for giving USD 50 gift certificate to the people who adopt the dogs featured on their boxes. 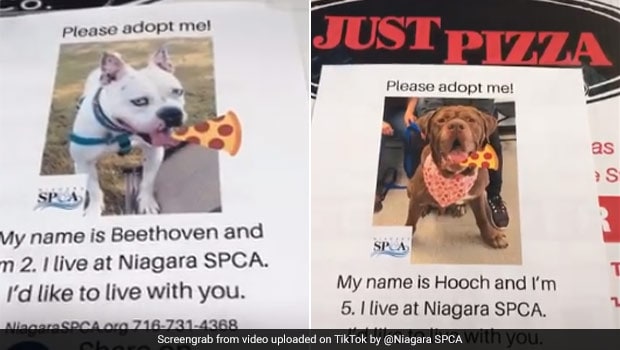 Do you love both your pizza and your pet? If yes, then this news may brighten up your day. A United States-based pizza shop has started a heart-warming initiative to help dogs find permanent shelters. As per a report in ANI, they initiated the campaign by putting flyers for the canines on pizza boxes (pizza boxes having pictures of displaced dogs). The campaign by the pizzeria also includes a provision for giving USD 50 gift certificate to the people who adopt the dogs featured on their boxes.

As per the report, the idea of such an innovative campaign came to Marry Alloy, a franchise owner of the pizzeria (named The Just Pizza & Wing Co), when she was volunteering with the Society for the Prevention of Cruelty to Animals (SPCA).

She said, event coordinator Kimberly LaRussa, with whom she volunteered at the SPCA, texted her one night and said, “Hey, what would you think about putting pictures of the dogs on pizza boxes?”

Alloy was excited by the idea and according to the ANI report, took “permission from the franchise to do it and immediately got to work.”

This initiative by the pizzeria impressed several people and they showered their appreciation to the former through Facebook.

On the recommendation and reviews section of The Just Pizza & Co's Facebook page, one wrote, “Haven't tried them yet but giving a positive review for the wonderful work their doing to help the doggos of Niagara SPCA. You go Just Pizza!”

“I have not tried their pizza but I just wanted to say that Just Pizza & Wing Co Amherst is awesome to partner with Niagara SPCA to put local shelter dogs on pizza boxes to get them adopted!”

“Anyone who does this has awesome food! Thank you for doing this!! I hope other companies follow this wonderful idea,” wrote another person.

The report also says that the franchise is receiving interests from the customers after the adoption of a six-month-old puppy under the initiative.