Raveena Tandon got a delightful surprise visit from her husband, Anil Thadani, who treated her with a dinner for two in Dalhousie. 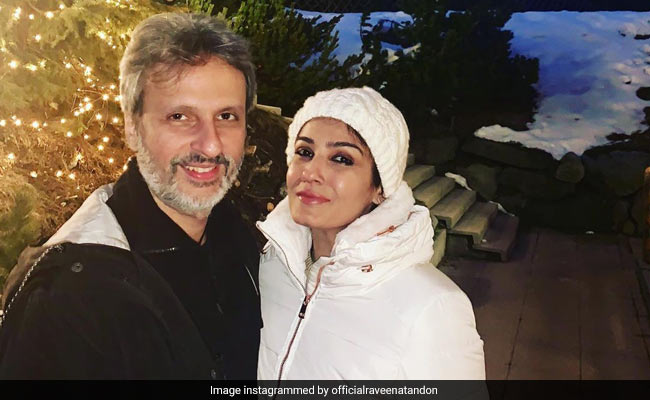 Bollywood star Raveena Tandon turned 46 today on October 26, 2020, and spent her birthday in Dalhousie, Himachal Pradesh, where she is currently shooting for an upcoming project. On the special day, Raveena Tandon got a delightful surprise visit from her husband, Anil Thadani, who treated her with a dinner for two. Raveena Tandon posted a video with her husband from the intimate candlelit dinner, which featured some cute decorations and balloons strewn over the floor. She captioned the picture with - "Guess who landed up for dinner 1,938,1 km away! It's a dinner for 2 #bestgiftever."

Raveena Tandon also posted some pictures from the other birthday celebrations, apparently planned by her colleagues accompanying her to Dalhousie. A huge chocolate cake with cream fondant topping could be seen in the pictures that Raveena posted with the caption: Thank you my darling @reemapandit for setting up a fantastic birthday eve , one of the best ! Thank you team ! Missing the rest of our team ! Love you all my family so much."

Well, that's not it. To make her birthday even more special, the crew of  Raveena Tandon's soon-to-release film of 'KGF: Chapter2' released the first look of her online character. Raveena shared the post on Instagram exclaiming, "Presenting Ramika Sen from KGF: Chapter2. Thanks KGF team for the wonderful birthday gift."

(Also Read: How Anil Kapoor Got Fit In Lockdown And The 'New Approach To Eating' He Tried)

Raveen Tandon will be seen along with actor Sanjay Dutt in 'KGF: Chapter 2'. Raveena also described the essence of her character in her post by writing - "The gavel to brutality!"

We heartily wish Raveena Tandon a very happy birthday and wish her more success in the future.