Shehnaaz Gill rung in her 28th birthday with family and friends. The video of her special celebrations with close friend Sidharth Shukla went viral. 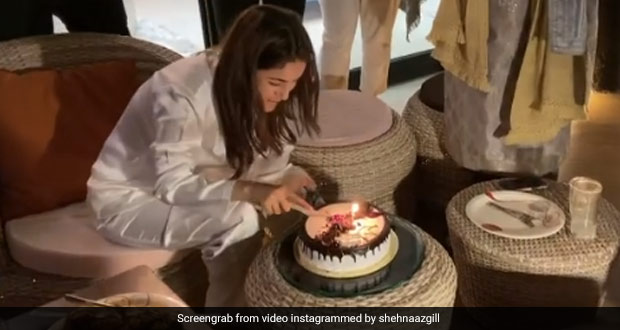 Actor-singer Shehnaaz Gill rang in her 28th birthday on 27th January 2021. The former Bigg Boss 13 contestant celebrated her special day with family and friends. Her close friend Sidharth Shukla also featured as part of the celebrations. Two videos of Shehnaaz Gill's birthday party were shared by the actor herself on Instagram. In the first one, we could see her being thrown into the pool by Sidharth Shukla and his relative after counting up to 27. The next video featured a yummy birthday cake that Shehnaaz Gill cut on the special occasion. Take a look at the video:

The beautiful and creamy cake had a vanilla cream icing, with melted chocolate dripping from all sides. Some edible flowers adorned the centre along with a 'crown' shape with golden cream on either side. We could also spot some delicious appetisers which were part of Shehnaaz Gill's birthday party. She fed the cake to her family and friend Sidharth Shukla after cutting it, as they sang the birthday song for her.