US President Donald Trump To Be Greeted With Khaman, Chai And Samosa During His Visit To Sabarmati Ashram In Ahmedabad 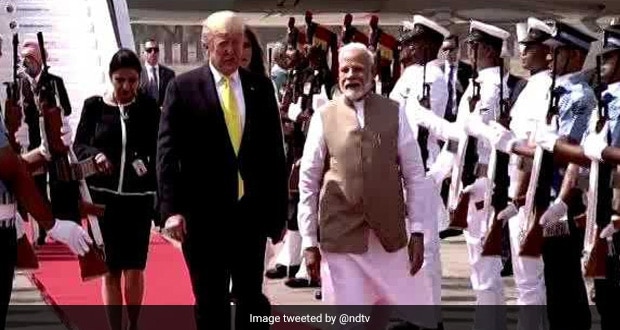 Donald Trump on his first official visit, would be served from a specially curated menu.

US President Donald Trump has arrived to India along with wife and the First Lady of The United States Melania Trump today. Preparations to welcome U.S President are in full swing. President Trump also tweeted in Hindi about his schedule shortly before his arrival in Ahmedabad to which PM Modi responded, 'Athithi Devo Bhava' (Guest is God).

The highlight of US President Donald Trump's tour is the grand "Namaste, Trump" reception at Ahmedabad's newly-built Sardar Vallabhbhai Patel Cricket Stadium. Mr. Trump would also be welcomed with a special menu that is being looked after by Chef Suresh Khanna from Fortune Landmark Hotel.

He told ANI about the "special preparations" that are underway for the US dignitaries. Chef Khanna along with his team would be preparing food for US President Donald Trump, First Lady Melania Trump and PM Narendra Modi during their visit to Sabarmati Ashram in Ahmedabad, Gujarat. The special menu would include a mix of local, regional delicacies and gourmet delights. Some of the star dishes of the menu are Khaman, a popular Gujarati vegetarian snack, made with fresh ground channa daal or channa flour (besan), along with Gujarati ginger tea, ice tea, broccoli and corn samosa and multigrain cookies.