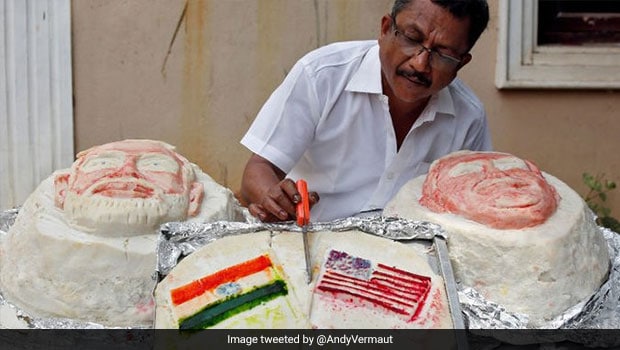 Idlis were made by a food-artist in the honour of Donald Trump's visit to India.

The President of the United States, Donald Trump, visited India along with his wife Melania Trump and his US delegation. His daighter Ivanka Trump acccompanied him too. India geared up for the visit like never before, cleaning up roads and sprucing up monuments. A Chennai-based food-artist had his own novel way of welcoming Mr. President to the country. Iniavan, who is a chef himself, made three colossal idlis with Donald Trump's face carved out on one and the Indian Prime Minister Narendra Modi's face on the other. Take a look:

Indian Food Artists in Chennai Give US President Trump a Unique Welcome https://t.co/2l634R5iRhpic.twitter.com/cYtnNcIlfp

The three massive idlis featured the two leaders on two idlis each, and the third idli was a combination of the flags of the two countries. The three idlis made with rice batter were so huge in size and almost looked as big as entire cakes by themselves. The combined weight of all three idlis was a whopping 107 kgs. Food artist Iniavan prepared the idlis along with six workers to help him. Even with such a big team, the whole project took 35 hours to complete. The faces on the idlis were carved out using a knife, and food colouring was presumably used to give the idli sculptures a hint of colour.

Both the leaders are yet to react to this huge tribute made to the Indian-American friendship. Donald Trump is on a visit to the cities of Ahmedabad, Agra and New Delhi beginning from February 24, going up till February 26. Chef Suresh Khanna has been preparing delicious finger foods for the visiting dignitaries such as the Gujarati khaman, ginger tea, broccoli-corn samosas, and multigrain cookies. There were also desserts on offer such as apple pie and Kaju katli. Take a look at the menu:

Indians are known for their warm hospitality towards guests as they are always willing to go the extra mile to ensure a memorable stay. President Trump was not just ensured of a great gastronomical experience, but also three record-breaking gigantic idlis made to commemorate his visit!