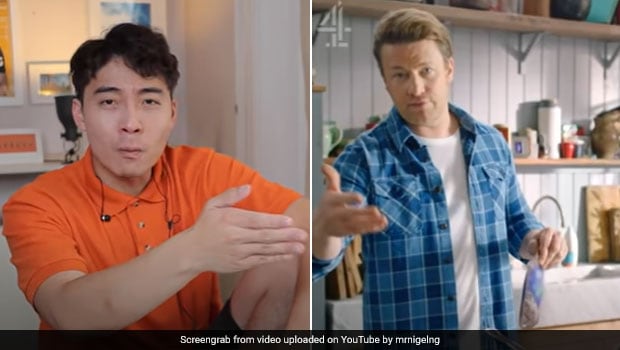 Anyone who is a true food lover holds their regional cuisine close to their heart. So, when a Malaysian comedian Nigel Ng saw the classic Asian egg fried recipe being ripped apart, he just could not take it. Going by the name of Uncle Roger on YouTube, the comedian shot to fame with his earlier spoof of a fried rice recipe that went viral. Now he is back with another review of egg fried rice recipe (all in good humour) of none other than that of celebrity chef Jamie Oliver.

The internet's favourite uncle dismissed world-renowned chef Jamie Oliver's egg fried rice recipe as 'all wrong'. In his recent YouTube video that went viral (of course), he took on the recipe filled with discrepancies and questioned its authenticity. He voiced his opinion on all things wrong in such a funny way that you'll end up 'falling off your chair' laughing seeing Uncle Roger claiming that "he fell off his chair" with astonishment while watching the recipe video.

So, what all ticked off Uncle Roger?

1. First thing that irked off Uncle Roger was the use of frying pan instead of a wok to make this Asian delicacy. He commented, "Jamie, where's your wok? "Uncle Roger will send you one wok for free, Jamie."

2. When Jamie Olive started cooking by putting spring onions, Uncle Roger averred, "they should be used as a garnish, not as a base to the dish".

3. Authentic egg fried rice is made with cooked rice and not with a pre-cooked rice packet. So, when Jamie Oliver picked up a rice pack, Uncle Roger took offence to it.

4. Uncle Roger snubbed at the idea of using chilli jam and olive oil, reminding the chef that Asians just use sriracha sauce. "Is this how you trick white people to eating chilli"?

5. The sight of peanut butter was too much for him. "What are you going to put in there next - peanut butter?"

6. And, adding water in the rice made it 'look so wet, "you can see your reflection inside". "You hear sizzling? I hear my ancestors crying."

7. Uncle Roger pointed out at the step of splaying scrambled tofu on the fried rice and said we cut tofu into cubes and "not tear it like paper".

The 10-min long video spread like wildfire on the internet, spawning tons of laughter and giggles. Uncle Roger also posted the viral video on his Twitter account saying, "Hey @jamieoliver I reviewed your egg fried rice video as uncle roger".