Viral: This 70-Year-Old Grandmother From A Maharashtra Village Is The New YouTube Sensation

Viral: Despite all odds, this woman from a rural village in Maharashtra managed to wow everyone with her traditional recipes, that too at the age of 70 years. 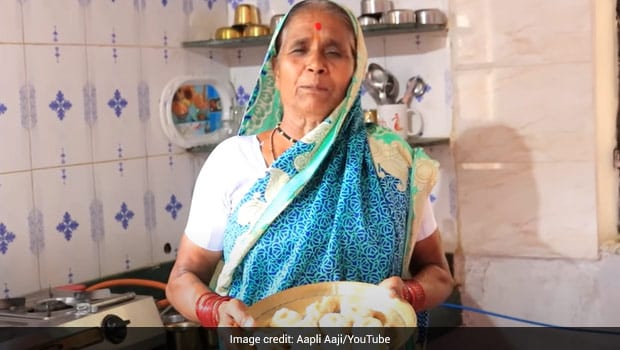 Within a few months of posting her first recipe on YouTube, this woman is already a star in the internet world. Her story is one of all those rare success stories that awe us and inspire us. Despite all odds, this woman from a rural village in Maharashtra managed to wow everyone with her traditional recipes, that too at the age of 70. With no formal education, no internet knowledge and limited resources, Suman Dhamne managed to turnaround her luck and become a face to reckon with on YouTube. Read on to get inspired!

It all started with Suman Dhamne's 17-year-old grandson recognising her cooking talent. He decided to start a YouTube channel called 'Aapli Aaji' and started posting her Maharashtrian food recipes made with homemade spices and masalas. Months later, Suman Dhamne was accorded with the YouTube Creator's Award that felicitates YouTube's most popular channels.

Suman Dhamne, with the help of her grandson, shoots and posts the recipes from their home in Sarola Kasar village, about 15 km from Ahmednagar. Her YouTube channel already has more than six lakh subscribers, and her recipe videos attract millions of views every day.

From vada pav and pav bhaji to besan ladoo and balushahi, you'll find all popular Maharashtrian recipes on her channel but made in traditional style. Her humble style of hosting the videos and teaching simple recipes with traditional flavours seem to have won many hearts. Subscribers don't forget to shower her with love in the comments on all her videos. It's truly heart-warming! As they say, it's never too late to realise your dreams.