A viral video of a home chef cooking mashed potatoes by boiling potato chips has disgusted the internet. Here's the correct way to make them! 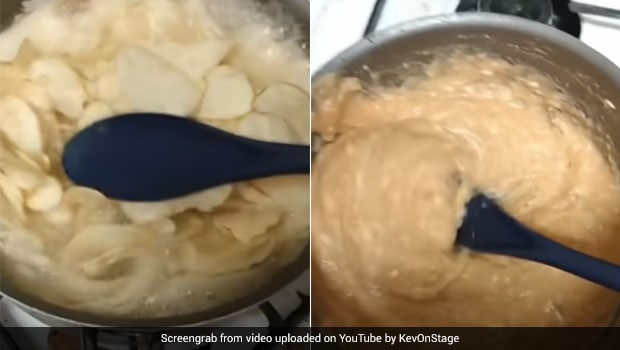 A viral video has disgusted the internet for making mashed potatoes with chips.

There is an abundance of knowledge and entertainment on the internet. We can spend hours looking at delicious cooking videos and cakes being made, as well as interesting food hacks which make the art of cooking much easier. However, not all these hacks are practical in real life and a recently surfaced cooking video is proof of this. A home chef made mashed potatoes by boiling several packets of potato chips, much to the collective disgust of the internet. Netizens were left perplexed and wondering why exactly one would use a packet of perfectly crisp potato chips to make the creamy and soft mashed potatoes when real potatoes could be used instead.

Take a look at a YouTube comedian's reaction to the viral video here:

Home chef Eli started the recipe by first adding salt and vinegar to a pot of boiling water. Then, he throws in a few bags of chips and allows it to cook, stirring continuously until soft and mushy. He proceeds to drain the potatoes, straining out the excess water and drinking it for no apparent reason. Next, he puts the mushy chips into a pan with some grated cheese and paprika. "Delicious," he exclaims at the end while trying his bizarre creation.

Users reacted to the weird video pouring in surprised comments like, "All the money he spent on those several bags of chips could've been saved by just spending $1for a box of mashed potatoes." Another said, "This is thoroughly disturbing and entirely unnecessary," while yet another said, "Better off just eating the chips as they are."

Mashed potatoes can easily be made at home with this viral recipe.

After watching this bizarre video, we searched for a delicious and easy mashed potatoes recipe that you can try at home. An easy recipe for mashed potatoes had recently gone viral, involving just four ingredients and a simple method to make them super creamy. Shared on Instagram by a 19-year-old Australian chef, Morgan Hipworth, the wonderful recipe is a must-try to make authentic mashed potatoes at home.

Click here for the full recipe of mashed potatoes.