50 Girls to 50 Chefs: A Charity that Works for Underprivileged Young Adults 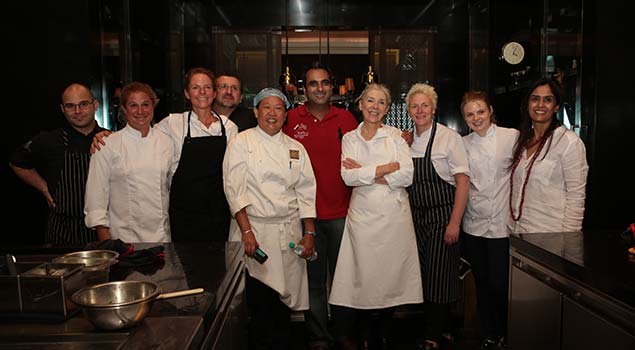 A fully equipped kitchen, fifty talented girls and eight international Michelin-starred chefs. The sound of sizzling and crackling, punctuated by the aroma of freshly baked bread from the oven and that of herbs being used for garnish. Fresh organic ingredients transformed into a bevy of dramatic dishes with bold flavours that speak for themselves.

It was a feast for a good cause at Le Cirque in New Delhi. I’m always impressed when I see restaurants participating in community campaigns and particularly those that empower. The Creative Services Support Group (CSSG) is a charity that not just supports unprivileged children, but creates their future. Their aim is to break down barriers and enable equal opportunity.

Based on an independent study, the organization found that in most NGOs, the academically-oriented 10% manage to grab white collar jobs, 40% give in to labour services while 50% of the crowd are unemployed as they lack the skills to find better jobs. An initiative that flagged off four years ago, CSSG has been assisting those young adults by nurturing creative talents and offering opportunities, direction and support. Once a child turns eighteen, most charities withdraw their support. This is where CSSG steps in to ensure that they are able to build sustainable livelihoods for themselves.

They have dedicated 2015 as the ‘Year of Women’ and are trying to change the lives of underprivileged girls by providing them with the education and training required to become successful chefs. “We started off with this project as a pilot with 40 girls. Today, we have over 50 girls who have undergone training and have about 200 more in the waiting. It is truly heart-warming to see the aspirations that the girls keep – they want to break out of this life and get into some serious careers,” shares Anand Kapoor, President, Creative Services Support Group.

The statistics are grim. About one-third of our population comprises of children but in many cases, especially for those below the poverty line, their interests are never given priority or they don't have the means to pursue them. A disproportionate number of out-of-school children in India are girls. The societal build-up suggests that boys have to be trained to earn a living and girls are mainly involved in household chores or family work. Ironically, women tend to be excellent home cooks but mostly it never translates into a career in this male-dominated industry.

"It's because of the nature of the work that tends to be more pressurizing and rough. Women are great in the kitchen. They're more organized, meticulous and patient. They complement cold kitchens, bakeries and cuisines that require delicate cooking and attention to detail," says Chef Jatin Malik from Tres.

(Clare Smyth: 'Having a Woman in the Kitchen Makes Men Behave')

Initiatives like these address the urgency of the situation, uproot age-old beliefs in our social structure and pave the way for the rise of independent women. “I strongly believe that it is important to show young women that there are opportunities beyond the conventional roles in society and provide them with the necessary direction. We need to create avenues that will empower them to make choices that can dramatically make a difference in their lives as well as in their communities,” says Anand. After all, the growth of any country relies on an educated as well as a skilled workforce.

From a number of NGOs across the city like Aman Biradari and Maitri, young girls with a desire to learn, were provided paid culinary training at Institute of Hotel Management (Pusa Road) and apprenticeship in established kitchens. I could see the grit and motivation in their eyes as their hands worked with the best in the industry dishing out Frittatas, Chargrilled Vegetables, Marinated Cherry Tomatoes, Apple Crumble with Vanilla Cream - all with great skill and ease. The pizzas that were made from scratch defined the art of perfection. Tender crust with bright tangy sauce and strings of cheese. I didn't want to part with my beloved plate of pasta. It was earthy and pleasant with seasoned vegetables. I was pretty much in heaven.

The girls got to learn from food connoisseurs from across the world - Anita Lo, Carrie Nahabedian, Frances Atkins, Lisa Allen and Sonja Fruhsammer to name a few. Chef Ana Ros who is also a member of an association of young restaurateurs in Europe traveled for the event from Slovenia. "We began our day by visiting an organic farm trying to make them understand where the ingredients are coming from, teaching them about farming techniques and how to source for the best quality. We decided to make some Italian dish and I was able to share a little piece of my everyday life with them. We cooked with the products we picked together," she shares.

Lilima Khan who’s gathered two years of cooking skills at Tres, a leading restaurant in the city, was the first to join the program. She's been trained on the job and can perform a slew of culinary techniques while she works in the vegetarian section. Anjali who also works at Tres shares that all she knew was that she loved baking and now finds herself whisking cream and learning new things every day.  She aspires to be a pastry chef. And Jyoti, another young learner, has just finished a two-month training course at IHM.  They all started from scratch, unfamiliar with ingredients and cuisines. But they rose to the occasion driven by a determination to live up to their potential.

"We collaborated with CSSG when the project was initially launched. I truly believed in their vision and approach.We already have two girls working with us and we plan to recruit more. It's not just professional training but a lot of attitude building and personal counseling that we focus on. They start with the basics of knowing ingredients and kitchen equipments and are upgraded to different tasks step-by-step," says Chef Jatin Malik from Tres.

"The idea is to give them a platform to build a career and not just offer jobs, which could even mean serving in fast food restaurants. It's our responsibility to place them under their role models," says Anand.

The response from the industry has been overwhelming. L’Opera, Avanti Mathur’s Sweet Nothings, Jaya Kochar’s Cakewalk and others were more than willing to mentor and help these girls transform their hopes and dreams into reality. At the event, about fifteen girls waiting to prove their worth were recruited by experts like Ritu Dalmia, Sabyasachi Gorai and Jatin Malik. The event will be followed by charity dinners held in Mumbai and New Delhi.

Promoted
Listen to the latest songs, only on JioSaavn.com
"I felt very connected to the cause because it involves a profession that has given me so much. I thought why not teach people and make them a part of my family. We've shortlisted five girls. The idea is to mentor them, get them on board and help them become self-sufficient. One of the chefs at the event shared something really meaningful that we shouldn't give them any task that they dont understand the value of. Therefore, we'll focus on training them and make then understand the ethics of managing a kitchen," says Chef Sabyasachi Gorai.

It’s a campaign that spreads the light of capability.  I left stuffed and inspired.