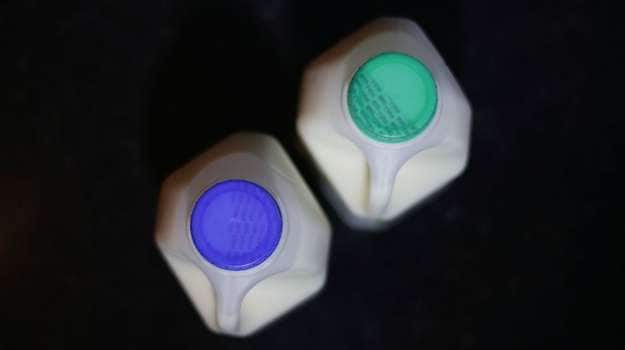 Dairy farmers are telling consumers not to buy milk at Morrisons, Aldi, Lidl and Asda as the battle over prices spills on to the high street for the second time in three years. Farmers have been protesting in UK supermarkets this week, with more action planned on Thursday night, after three major milk processors " Arla, First Milk and Dairy Crest " all said at the weekend they would cut the price they pay farmers.

Related: The battle for the soul of British milk | Jon Henley

David Handley, a farmer from south Wales who has led farmer protests, said shoppers should avoid Morrisons, Asda, Aldi and Lidl. "None of them have got a formula in place that's paying a sustainable price to dairy farmers," he said.

He added that, of the major chains, only Marks & Spencer and Waitrose paid a sustainable price for all their milk products " including cheese and cream " and that otherwise shoppers should try and buy from farm shops or their local milkman.

Global dairy prices have been falling for months as good weather helped boost production just as a Russian ban on importing dairy goods from Europe and a decline in sales to China dents demand. However, farmers in the UK say they have been suffering particularly because of a supermarket price war in which basics such as milk and butter have had prices slashed.

Farmers were paid an average 23.66p per litre for milk in June, down 10% since January and 25% lower than a year ago, according to AHDB Dairy, the British dairy organisation. Farmers say they need to be paid at least 30p to produce each litre. Tesco, Sainsbury's, M&S and Waitrose all promise to pay fairly under specific contracts. But only 7% of milk produced in the UK is sold under such terms.

On Thursday, Farmers for Action, the group which Handley leads, is planning to protest outside Morrisons' distribution centres and carry out a number of "trolley dash" protests, in which farmers clear supermarkets' shelves of milk and give it to charities. A nationwide day of action is planned on Friday.

The Royal Association of British Dairy Farmers has warned that the latest price cuts will force more farmers into bankruptcy. Around 1,000 dairy farmers have left the industry over the past two years, with three to four farmers giving up each week, saying that they can no longer make milk production work financially, the association said.

Asda is selling its four-pint cartons for 89p this week. Back in 2012, when protests last hit the headlines, the price for a four-pint carton was on promotion at "£1. Aldi also currently charges 89p for four pints.

So what can consumers who want UK farmers to survive do? Can your spending power make a difference?

Are all the supermarkets the same?

Not all all. The best big stores have agreements in place to buy milk with guaranteed prices " at around the 30p per litre deemed the minimum " but this only covers around 14% of milk sold for drinking/consuming in the home.

Who are the good " or at least, the better " guys?

Waitrose, Tesco, Sainsbury's and M&S, because 100% of their own-label milk is bought under fair trade deals. Waitrose pays 32.08p per litre, while Tesco pays 30.93p per litre " but the fair trade deals they have in place only cover their own brands of milk. Other milk products are not covered.

Who is the best?

In May 2014, Booths launched a Fair Milk scheme, pledging to always pay the highest market price to farmers. Now the chain, which has more than 30 stores across Lancashire, Yorkshire, Cumbria, Cheshire and Greater Manchester, pays 33p per litre, the highest price among the big retailers, 10p per litre more than Asda and Morrisons.

What about the Co-op?

The big player in the convenience sector raised prices for farmers in 2012. Since 1 August, it pays 28.32ppl to its 200 dedicated farmer suppliers, which is better than the worst offenders, but behind its rivals and still less than the 30p that farmers demand.

Which shops should I avoid?

Morrisons, Aldi, Lidl and Asda have been singled out by farmers as not paying a fair price " or hiding behind the fact that they buy their milk from one of the big producers who pay significantly less than the 30p fair price. Arla, a milk co-operative, which is owned by farmers, cut the price it pays for milk to 23.01p. It supplies a number of stores and has its own brand of milk.

Is buying from the milkman better?

Yes and no. You can find a local home delivery provider at findmeamilkman.net. But as home delivery has declined in the UK, the market has consolidated into a few players, dominated by Dairy Crest. Last week, Dairy Crest, the UK's biggest milk processor, cut its price by 1.4p to just under 22p, way below the 30p guide.

Are there still independent milkmen?

Yes " look on the internet for one. Sutton Coldfield Dairies, which serves part of Birmingham, was set up by Phil Mitchell, who quit Dairy Crest, saying he was fed up with their methods. He buys all his milk from the Cotteswold Dairy in Tewkesbury, which he said pays farmers a decent rate. "We pay 43p a litre and deliver to around 1,400 customers in the north Birmingham area," he said. "The price to customers is "£1.05 a litre, which is slightly more expensive than the supermarkets, but it is delivered to your door. I reckon the supermarkets are selling it too cheaply anyway " it's a loss leader for them."