Hit and Run: The Lost Art of Making the Perfect Italian Espresso 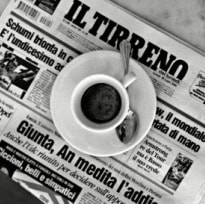 It's the classic quick, dirty coffee that you drink for the buzz rather than the taste. Is it time we set aside our cortados and rediscovered its earthy pleasures?

Britain's bean fetish shows no signs of fading. In independent coffee shops up and down the country, piccolos and cortados are now jostling for space amongst flat white and cold brews, likely concocted from espresso made with single origin beans from local roasteries. This is the "third wave" of coffee (the second started in the late 90s when Starbucks rolled into town) and we've been in its grips for a few years now.

But what happened to black, bitter, unashamedly bracing Italian espresso? You know, the stuff that kick-started coffee culture back in 1884 when Turin-based business man Angelo Moriondo created arguably the first espresso machine. This is the question being asked by Carlo Odello, a 37-year-old southern Italian coffee obsessive who wants to reignite our love for the real deal. "In many ways, Italians are to blame for the poor image of their coffee in Britain," he says. "Traditionally, our roasters didn't think British people were capable of appreciating real flavour, so a lot of them just exported any old rubbish and kept the good stuff for themselves. These people have almost killed the image of Italian coffee and now it's my job to rectify that."

Odello's mission to reveal Italian espresso as a thing of beauty kick-started in London last month with the Espresso Italiano Champion, which saw 15 hopefuls battle to produce the world's best traditional espresso. He has also founded the Italian Barista School, whose sole aim is to teach the art of making it properly. "It is a very specific drink," he says. "You take seven grams of coffee and extract it for 25 seconds until you are left with a 25ml shot of coffee. It might sound easy but it's incredibly hard to create the perfect shot. It should be full-bodied and display a nice thick layer of golden crema. As for flavour, think nutty, chocolaty and a little earthy. It's an entirely different thing from the kind of espresso you find at third-wave cafes these days, which in my opinion is too fruity, acidic and one-dimensional. I compare it to listening to a beautiful singer but without the help of an orchestra."

And it's not just that we're making it wrong; we're drinking it wrong too, lounging around in coffee shops. Done properly - the Italian way - it is a ritual, according to the owner of legendary Soho cafe Bar Italia; an establishment that has been serving traditional Italian espresso for 65 years.

"The word espresso, in Italian, means quick. And that's exactly how it should be enjoyed," says Antonio Polledri, Bar Italia's owner. "A proper Italian espresso isn't designed to be savoured, it's supposed to be knocked back at the bar. People drink it when they are on their way to work or after a meal; it's basically a kick to keep you going. When coffee culture was imported here in the 1950s that's how most coffee was enjoyed. But these days it's all about sitting around nursing a long coffee. If I'm honest, I find it all a bit gimmicky."

While Odello, Polledri and other Italian espresso evangelists lament the decline of their country's most treasured drink, others are less sympathetic. "The roots of espresso are in post-second-world-war Italy," says James Hoffman, owner of Square Mile Coffee Roasters and author of the World Atlas of Coffee. "It was an incredibly poor era, so most of the coffee drunk during this time was made using cheap robusta beans which are hardy, contain a lot of caffeine and create full-bodied coffee." The problem is, they just don't taste very nice, which is why it's a good thing the UK is now importing less coffee from certain Italian roasters. "When it comes to good food, the British public are lot more discerning than they used to be," he adds. "In the last five to 10 years, for example, we've seen the rise of sourdough bread, hoppy beer and great coffee. And once you've become accustomed to new, exciting flavours it's very hard to go back."

Hoffman might just have a point. With latte art and increasing choice available everywhere from service stations to supermarket cafes, it's clear the British public have embraced third-wave coffee culture hook, line and sinker. Perhaps we're just not missing what Odello calls the true genius of a proper Italian espresso.

Morning coffee ... the orginal, if not the best. Photograph: VISUM/REX