Love Chillies? Says a Lot About Your Personality 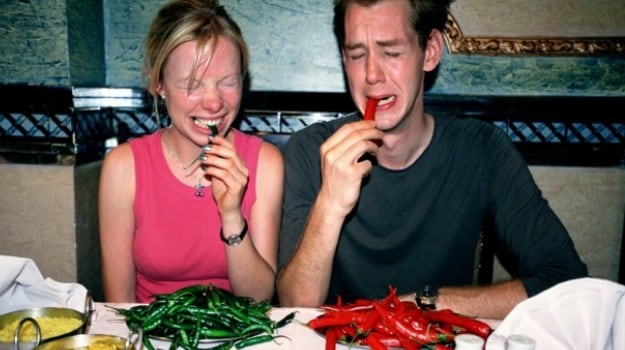 Not much machismo on display here. A couple eating chillies. Photograph: Alamy

For many men, competitive chilli chomping is a display of machismo, while women actually enjoy the burn.

The man in my life extracted the small pepper from its jar, popped it in his mouth​, then hopped around the kitchen for a good half an hour afterwards, inhaling yoghurt, opening his mouth under the tap, tears streaming from his eyes, his face turning a spectacular and frankly worrying shade of purple.

Me? No sympathy. None. It said on the jar “Naga Viper Chillies – The World’s HOTTEST”. The clues were there (although it turns out they were bending the truth slightly – there are hotter fruits even than the Viper.) What possessed him? What possesses men – and it is usually men – to trample over their tastebuds by subjecting them to painful capsaicin heat?

It seems, from studies at Penn State, that it’s a personality thing. That the kind of people who are drawn to thrill-seeking action movies and risk-taking are also drawn to searing off the top layer of their tongues with Carolina Reapers or Ghost Peppers. ​Female chilli addicts, it transpires, enjoy the actual physical sting, whereas with men, it’s more about a display of machismo. No. Shit.

​Mangling your mouth in the name of macho is a surprisingly popular pastime. From the huge, orchestrated events in the US and UK (“Man v Fire Extreme Buffet featuring Ted the fire-breathing idiot”, promises one in Brighton), to the many YouTube videos of chaps necking Ghosts and then being remarkably perturbed by the results. (I wade through the first 10 or so. Nope, not a gal in sight.) It is a popular PR wheeze for restaurants to put chilli challenges on their menus, then sit back and count the column inches when “unwary” contestants are hospitalised.

Mark Gevaux, “The Ribman”, who is responsible for some truly excellent chilli sauces, reckons it’s about the endorphins, which can have the pleasing effect of distracting from ​actual pain​, and cause the famous “chilli high”. His hottest sauce, a searing little number made from Moruga Trinidad and Butch T Scorpions called For the Love of God, is so intense that people have been sending him videos ​of their distressed reactions to a glug of the stuff. And by “people”, I mean “men”. ​Gevaux confirms the Penn State findings: a “big lad” was left writhing in agony at one of his street food events, not just because he’d necked a Scorpion​, but also because a tiny woman popped another one “like it was a grape”.

I love the tingle of chilli, even properly poky spicing, ​the kind you get in a ​northern Thai larb or Gevaux’s Christ on a Bike sauce. But signing up for the kind of ​agonising fire caused by the ​Bedfordshire Super Naga or the innocuously named but evil Chocolate 7-Pot is just bonkers. It reminds me of the dumbass likes of Jackass or Dirty Sanchez. If you want that kind of pain, give me a shout and I’ll stick needles up your nostrils. That way, at least one of us will be having some fun.