So mild cheese is in decline? Excuse me while I applaud 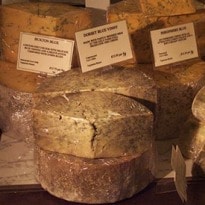 It's plasticky, cheap and a non-food. Our tastes have matured away from rubbery blandness

It is revolting, mass-produced "cheddar" that has done much to damage the cheese's ubiquity on our dining tables and in our affections. I worked in restaurants where it arrived in blocks the size of girders; when you freed it from its polythene, it would sweat sour, milky droplets on to your hands whose smell would linger, wash after wash.

So mild cheddar is in decline? Excuse me while I applaud. Our tastes have matured away from rubbery blandness, matured like a good cheese, created with love, matured with care and stored like a treasure.

You can do what you like to that plasticky cheap cheddar - and, if the proliferation of Cheestrings is anything to go by, people do - but it's a non-food, a sop to infantile tastes, as unhealthy and ungratifying as hoovering up lard.

There are, of course, some great cheddars and cheddar-style cheeses out there - even in the supermarket. I'm very keen on one called Tickler that has granularity, nuttiness and tang by the bucketload.

Savvy UK cheesemakers are concentrating on the nurture of intense flavour and quality rather than bulk: Keen's Cheddar, Wookey Hole cave-aged, Quickes Vintage and West Country Farmhouse, from Barber's, are regulars on the cheeseboards of restaurants that pride themselves on the best of British. There are many more like these, but the characteristic that unites them is, well, character. There's nothing mild about these numbers.

When cheddar manufacturers say on their websites, "We are able to supply block cheese in the following types: Mozzarella, Cheddar, Analogue*" the response isn't "yum". I won't shed a tear if this kind of thing dwindles away to nothing.

Photo: Cheese on display at a shop in Jermyn Street in London. Photograph: Frank Baron for the Guardian