Some Dishes Just Aren't Made for Sharing 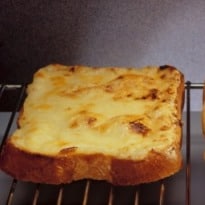 Some filthy food secrets are simply unforgivable. Best that you keep them behind closed doors

Recently I became a national hate figure. Not since I admitted I thought negronis taste like bad dental mouthwash, have I felt so reviled. Apart from the time I rolled my eyes at nasty sour espressos. And the time I admitted to having eaten a festering sausage off one of those carts in Trafalgar Square late at night. But this one was especially intense. You'd have thought from the violent tweets and emails, that I had suggested roasting times for one of Prince George's chubby thighs. When all I did was give out my recipe for cheese on toast.

By which I mean my real recipe. Oh sure, I could have avoided all the vitriol by coming up with some rustic fantasy recipe involving West Country cheddar and a pinch of finely chopped shallot. But ever the generous soul I gave them the real thing: I announced that it involved any old cheddar, a thick dusting of that brilliant rust-coloured Caribbean Everyday Seasoning sold in shops across Brixton, a big splash of Tabasco. And bacon. Because everything is better with bacon. Especially cheese on toast.

Or not as the case may be. I revealed my recipe on BBC Radio 4's Saturday Live, hosted by the Rev Richard Coles and Suzy Klein. That show will embrace any alternative lifestyle. You can be in a polyamorous relationship with a sheep and a bit of bacterial mould from the back of your fridge and as long you can talk movingly and honestly about it, over a wistful Joni Mitchell-Nick Drake mashup backing track, it's fine. The listening millions will applaud you. But suggest adding bacon to your cheese on toast and you are, rather fittingly I suppose, toast. Richard Coles's recipe - a dribble of ale, some Worcestershire sauce; he's just so vanilla - was deemed by the public to be "correct".

My problem here was boundaries and my failure to recognise where my own lay. The fact is we all of us have deeply private food things; weird, strange and often ugly ones that should never be witnessed by others. Cheese on toast is one of them; it's private food. Like picking our toenails in front of the telly, these food habits are the stuff which make us human. They are the things that happen and which all of us are aware of, but about which we never speak. They are what front doors were invented for. That's where they stop.

There are otherwise normal, tasteful people who think cheese and jam sandwiches are lovely. There are some who are never happier than when eating soft vanilla ice cream straight from the tub using salty crackers, or who dredge bits of bread through the cooling fat at the bottom of the frying pan when they think nobody is looking. Or who nick leftover chicken skin off other people's plates when they're clearing up. Perhaps that's just me. Hell, there are even people who very privately think Pop Tarts are nice.

But, like speeding tickets, not everything should be shared. And that includes the things only we want to eat. It doesn't matter that the crisped pig fat of bacon is the perfect salty foil to the slurp and suck of melted cheese. I need to recognise that this is my predilection. This is my habit. I need to accept myself. In short, I need to close the door and just get on with it. And no, I won't make you any. OFM

'Everything is better with bacon. Especially my cheese on toast.' Photograph: Christine Hanscomb/Getty Images