Spice Box: In Six Compartments, All the Flavours of Home 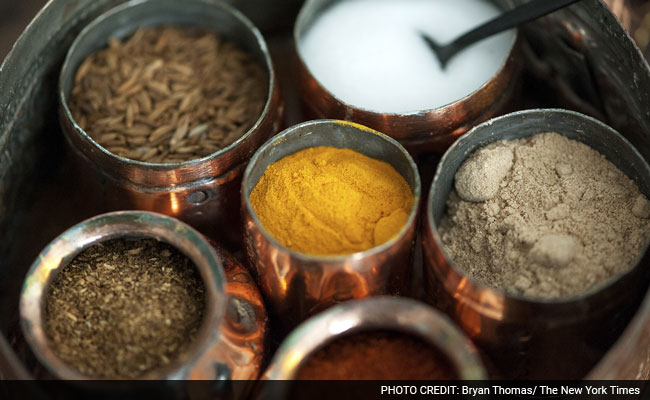 Before Sonny Caberwal left his small hometown — Asheboro, North Carolina — for college, his mother, aunt and grandmother pulled him into the kitchen.

“I think they thought I was going to starve,” said Caberwal, 36, the founder of Bond, a venture that seeks to resurrect the ritual of handwritten correspondence, using robotics.

The women taught him to make rajma, his favorite dish, a Punjabi curry of red kidney beans. Then his mother gave him a loondani, a round spice tin of beaten copper, the size of a small kettle. Today it sits, shining and ornate with a Braille of flowers, in the coolly modern kitchen of his apartment in the financial district.

Unlatch the domed lid and you find a shallow tray with a long, dainty spoon for measuring. Below are tucked six canisters of spices, five of them — loon (salt), jeera (cumin), dhania (coriander), lal mirch (red chile) and amchur (mango powder) — arranged like petals around haldi (turmeric) at the center. “You keep all the spices together so there’s no rummaging around,” Caberwal said.

With this, his mother had equipped him to face the world, even though he was going only an hour way, to attend Duke University in Durham, North Carolina. In a sense, he wasn’t leaving home at all: His family’s gurdwara (Sikh temple) was in Durham. There he had helped out in the langar (communal kitchen and canteen), where everyone gathered after services to cook and eat together.The langar meal is free and open to all. “You don’t have to be Sikh,” he said. “Everyone sits at the same level and eats the same food.”

Sonny Caberwal holds the copper spice tin given to him by his mother.

He eventually strayed farther, studying law at Georgetown University. He was living across from the Pentagon on Sept. 11. In the aftermath, a number of Sikh Americans were harassed and attacked by people who confused their turbans and beards with the garb of Muslim militants.

“Since I was a kid, people always look at you because you’re different,” Caberwal said. “But that’s part of being Sikh, to wear the uniform, to look different.

“I’m not the most religious person in the whole world,” he added. But in 2008, he became an ambassador of sorts for the Sikh faith, appearing in a Kenneth Cole ad campaign with the headline “We All Walk in Different Shoes.”

The sight of a Sikh man on a billboard, in a turban and rakish sunglasses, was considered radical enough to be front-page news in The Times of India. (Caberwal had sent in a photograph after the company put out an appeal for a Sikh model.)

“I’ve always had this idea, how tradition and new things go together,” Caberwal said. He briefly played the tabla with the electronic dance band Thievery Corporation and, with his wife, Preeti Bal, a Sikh from Ohio, ran an e-commerce site from a New Delhi office near 13th-century monuments.

Listen to the latest songs, only on JioSaavn.com
These days Bal does most of the cooking, although Caberwal tries to take over on weekends, recreating his mother’s dishes. “For our kids” — a 3-year-old daughter and year-old twin sons — “it’s important,” he said. “We don’t have the same grounding in our culture because we were born in the U.S.”

On his first date with Bal, 10 years ago, he cooked dinner. The main course: rajma, whose recipe called for almost every spice in the loondani. “I said, ‘Really?'” Bal said with a laugh. “'You’re going to feed a girl beans and rice?'” It worked.