Time Has Arrived for Reacquainting Yourself with Brussels Sprouts 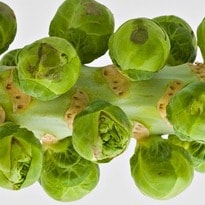 These Christmas staples have an undeserved reputation. Given the correct treatment, they will reward you with their sweetness.

Make no mistake; brussels are dangerous brassicas. The difference between a good sprout - sweet and nutty with just a hint of crunch - and its evil cousin, sulphurous and malevolently soggy, can be measured in mere seconds.

Don't let this scare you off, however; they're not hard to cook, once you've accepted that most of what you probably know about them is wrong.

For a start, there's no need to wait until the first frost to stick sprouts in the trolley; older varieties had a more pronounced bitter flavour which was softened by severe weather, but the sweeter examples we prefer today demand no such spartan treatment.

It's also pointless scoring the base with a cross, whatever your mum says - hell, even Delia's changed her mind on this since the 1980s. Because sprouts are a dense vegetable, it's easy to overcook the outer leaves as you wait for the core to soften, but waterlogging them is an even more heinous crime.

Instead, steer clear of the expensive ready-bagged kind and cherry pick the smallest sprouts, which will cook through more quickly. If you can only find large sprouts, do as Gordon Ramsay suggests, and cut them in half before cooking.

Even better are the ones sold on the stalk; though you can't do much with the fibrous stem, it stops the sprouts drying out, so they're likely to reach you in better condition. (If it comes with its complement of lush green leaves, you've got lucky; sprout tops are even trendier than the sprouts themselves.)

Strictly speaking, there's no need to get involved in cooking at all. Finely shredded and tossed with lemon juice and olive oil, perhaps with a few toasted hazelnuts and a little crumbled goat's cheese, sprouts make an excellent salad, but it would be a shame to stop there.

To serve them in the traditional fashion, steam or boil them until just tender - this will take 5-8 minutes, depending on their size, so keep an eye on them. While they're softening, heat a glug of oil or a goodly lump of butter in a large frying pan along with any extras you might fancy - bacon lardons, flaked almonds or sliced garlic you might fancy.

Once the sprouts are done, drain well and add them to the hot pan, tossing well to coat them with the fat, then season and serve. (If you prefer them shredded, you can skip the boiling step and simply sauté them in the pan until tender.)

It's the roasted variety that I'd back to convert even the most fervent sprout doubter, however. Cut them in half, toss them in oil and salt and cook on a hot baking tray at 200C until golden and tender - those caramelised outer leaves will be deliciously sweet, and with no water involved, there's no chance of sogginess.

So, if you haven't joined the sprout revolution yet, don't wait until Christmas - they're too good to save for a special occasion.

Brussels sprouts on the stalk are likely to reach you in better condition. Photograph: Alamy