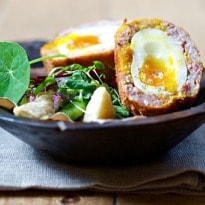 A study has shown that an artful plate of food tastes better - perhaps due to the effort that has been put in, or maybe for more complex reasons. How bothered are you by presentation, at home and eating out?

You don't have to be an artist or a scientist to be a really good cook, although a little bit of art and science is involved - cooking is both technical and creative. Take a perfectly cooked scotch egg. There is a precise method to be followed if you want to produce a crispy crumb and gloopy yolk, but it is the creative side that decides to serve the thing in its own garden of pea shoots, nasturtiums and skinned broad beans, a la the excellent Suffolk gastropub the British Larder.

The success of this arrangement, to my mind, is not only the fresh and peppery foils for the meat and egg. Visually, the greens put the eater in mind of nature's delights rather than the weathered cook's fingers, colour-coded chopping boards and deep-fat fryers that might have been involved in the preparation. It appeals to our nature-worshipping, uh, natures, and says: nutritious, of the earth, meant to be. And it looks beautiful.

Would this snack be yet more appealing, tastier even, if its components were arranged artistically, like a pleasing abstract painting? Well, judging by the prices that people are prepared to pay for swooshes of reductions and squid-ink skidmarks, one would assume that the answer is yes. One chef has finally put this question through a laboratory experiment that has been peer-reviewed (by scientists, not chefs) and is published today in the journal Flavour.

Charles Michel is a talented Franco-Colombian cook whose professional life began with classical French training courtesy of Paul Bocuse. This was followed by the tutelage of the three-Michelin-starred Italian chef Nadia Santini, who is all about, says Michel, "a more traditional, sensitive approach to making people feel happy through psychological and digestive wellness".

In recent years, Michel has divided his time between service kitchens and working as a researcher at the Crossmodal laboratory at Oxford University, which investigates how our senses mingle to create our experiences of the world. The lab has done a lot of work on flavour perception, "but it's all really precise", says Michel. "It's really interesting for brain science," he adds, but not so easily applicable in the kitchen. Michel has joined the team to help concoct some studies of greater and perhaps more obvious practical use in the real world.

For his first scientific paper as lead author, Michel has sought to discover the effects that artistic plating has on diners' expectations and experiences of a dish. His method was to serve a complex salad with 17 components (pureed beetroot, mushrooms briefly cooked in a sweet vinegar marinade, cauliflower and lemongrass creme) in three ways, to 60 people. They had no idea what to expect or what the hell the study was trying to ascertain.

The first presentation neatly arranged each ingredient separately. The second tossed the salad and served it simply in the middle of the plate. And the third looked like a Kandinsky painting entitled Painting number 2001 - which seems a bold choice to me, because it's not a neat image, and neatness has previously been shown to make food more appealing. The upshot was that the participants deemed the Kandinsky salad as more complex, artistic, appealing and tasty. They were willing to pay more for it, too. They didn't know that the dish was inspired by art - they just liked it better and, in his paper, Michel discusses a few reasons why this might be.

First, he says it shows that even though the subjects knew nothing of their favourite plate's inspiration, they were able to recognise an artistic pattern in the food intuitively. He also throws it out there that, since art involves the ability to communicate feelings and sensations, the art-inspired presentation of the food could have been an edible rendition of the message originally intended by Kandinsky. He points out that reward centres in the brain have previously been shown to be activated in people looking at art and processing complex visual stimuli, which could help explain why the participants deemed the plate they rated as more artistic and complex as the most likable.

Meanwhile, another study by some of the art-and-reward-centres gang has shown that consumers tend to think products associated with art are more valuable, and the effort put into making them is more appreciated. Michel quotes the philosopher Denis Dutton: "The value of an artwork is rooted in the assumptions about the human performance underlying its creation." Come to think of it, part of the explanation for why diners prefer neat plating in the aforementioned paper is that it, too, signifies that much effort has been spent on preparing the dish. Conclusion: other people's effort tastes good.

I shall take this to heart when dishing up my kids' dinner in a hurry. Food plonked on to the plate willy-nilly makes them deeply suspicious, whereas a pleasing pattern or an artful arrangement gets things off on a fine footing. How important is the artistic value of your food, either at home or eating out?