Why insects can be the future of food 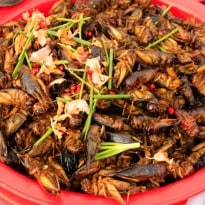 How would you react if your neighbourhood restaurant serves you a menu that only lists cuisines prepared from caterpillars or termites? People would soon have no choice but to consume insects as it would be increasingly difficult to feed the burgeoning world population -- close to 8 billion now -- in near future, warned the Food and Agriculture Organization of the United Nations (FAO).

How can these insects satiate your palate in years to come? Mopane caterpillars is one such insect. It is traditionally boiled in salted water and dried in sun before eating. It can last for several months without refrigeration. According to FAO, these are a good source of potassium, sodium, calcium, phosphorous, magnesium, zinc, manganese and copper.

Another nutritionally-rich insect is termites which can be eaten by frying, sun-drying, smoking or steaming in banana leaves. Termites generally consist of up to 38 percent protein. These are also rich in iron, calcium, essential fatty acids and amino acids, said the report.

Grasshoppers are widely eaten and often served roasted, flavoured with garlic, lime juice and salt, or with guacamole or dried chilli powder. The grasshoppers are also known as rich sources of protein.

Listen to the latest songs, only on JioSaavn.com
Stink bugs are consumed throughout Asia, South America and Africa. They are roasted, or soaked in water and sun-dried. These insects are a rich source of important nutrients, including protein, iron, potassium and phosphorus.