Can Insects Feed the World? 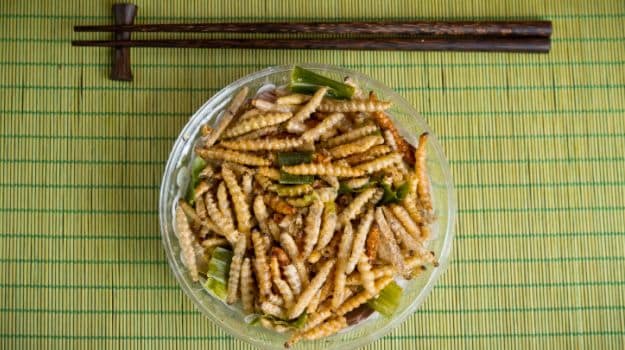 There was a time when they were considered as a delicacy, then they swarmed the streets as crowd pleasing snacks and today they are hogging the spotlight as the future of food but can insects feed the world?

Chefs and restaurants are dishing up menus with caterpillars, termites, grasshoppers, lady bugs and almost anything that can fly or crawl going into the frying pans. While the thought of insects on your plate may leave most of you squirming in your seat, if you look at it from a global perspective, it'll probably start to seem a lot more palatable. According to Arnold van Huis, an entomologist at Wageningen University in the Netherlands, insects can potentially provide food security to the world.

Huis studies the eating of insects, also known as entomophagy, and is the author of a book titled "Edible insects: Future prospects for food and feed security", published by the United Nations Food and Agriculture Organization. He is organizing the first-ever international conference at Wageningen University on 14th May to address the question of whether insects can feed the world.

According to a UN report, with the threat of a major food shortage looming over us, people may not have an option but to consume insects in the near future. It predicts that by 2050 global population will rise to 9 billion which will require twice as much food than we do today. If we look at the statistics, it is about twenty times more efficient to raise insects than meat, making it economically and financially more viable.

Environmentalists agree that the bug business is a much sustainable alternative. With lower green house emissions than cows and lesser feed and space requirements, they are a great way to save our natural resources.

In some countries like Thailand, Mexico and South Africa insects are popularly eaten but worldwide its consumption has been largely dismissed.

"Insects are still more or less considered as a poor man's diet. It still has that reputation. I hope we can change this perception of insects as food during this conference," van Huis told the journal Nature ahead of the conference.

"If you look at the social sciences, of course, consumer attitude is quite important. It is not just a matter of taste; it is also a matter of emotions," he added. According to Huis, he has seen an exponential increase in the interest for insects as food.

Another report released by the U.N. Food and Agriculture Organization shows that there are more than 1,900 edible insect species on earth.  Insects are a great source of protein and other essential nutrients which meat contains. In fact, they are considerably lower in fat than pork or beef and also carry a lesser risk of diseases being transmitted.

CommentsWith people becoming aware of its health benefits and turning into adventurous foodies, insects are popping up on plates more often than before. Mealworms, termites, stink bugs, grasshoppers and mopane catepillars form the famed lot that you might soon find yourself biting into.