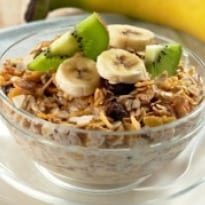 Porridge health benefits are undone by millions of women when they eat it with calorie-laden toppings, says a finding.

Mirror.co.uk reports that two-thirds of women who put cream, syrup, sugar or jam on their oats did not count the calories. A third said porridge is healthy, so the topping did not matter even though they could make the breakfast 300 calories - 71 more than a Mars bar, Special K found.

Two-thirds of women who added a sugary topping to their morning bowl of porridge admitted they did not count the calories and a third felt it didn't matter as oats were a healthy option anyway.

And five percent felt the goodness of the cereal wiped out the sinful effects of the extras they added and one in ten said the toppings didn't have that many calories.

A fifth said they didn't think about how many calories they were adding to their porridge, but more than half believed it was a slimming aid.

Promoted
Listen to the latest songs, only on JioSaavn.com
Angela Reay, a cereal maker, said: "Millions of women rightly believe porridge is a great start to the day if they are watching their weight."

"However, with almost three quarters of women choosing to add toppings to their porridge, many are unknowingly undoing all their good intentions by reaching for the sugar bowl or bottle of syrup."

CommentsSales of porridge have almost doubled to 241 million pounds since 2008.