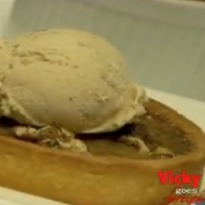 Very close to the chef's heart, the recipe of this dish was created by Chef Peter Goerge's mother. A warm and delicate tart with walnuts, raspberries and a butter-maple sauce.

How to Make Maple, Walnut and Butter Tart

HideShow Media
1.
In a cup, beat one egg and keep separately.
2.
In another cup, mix ice water and white vinegar up to the brim and keep aside.
3.
Then, in a bowl, sift the flour and salt together and keep aside. Now, cut the lard / vanaspati into little pieces.
4.
In a pastry blender, add half of the lard / vanaspati to flour mixture and blend until it becomes crumbly.
5.
Now in another bowl, add the egg, water and vinegar mixture in small amounts at a time and mix with a fork until balls form.
6.
Knead the dough lightly on a board and chill it in the refrigerator for an hour.
7.
In another bowl, beat the egg, butter, maple syrup, for 1-2 minutes in a bowl but leave the little chunks of butter in it.
8.
Then add 1/3 cup of raisins (plumped in hot water) and 1/3 cup mixed shredded coconut and walnut pieces.
9.
Now, roll out the dough and line twelve large well-greased muffin tins and fill each tart shell 2/3 full with butter tart mixture and bake in a pre-heated 400-degree oven for 8 - 10 minutes.
10.
If the tarts start to boil over turn the heat down to 350 degrees.
11.
Now for the filling, whisk an egg, butter, and maple syrup together in a pan.
12.
In the same pan, add brown sugar, salt, corn syrup and vanilla and whisk it again for 30 - 60 seconds.
13.
Now fill the baked tart shells with raspberry jam, shredded coconut, golden raisins and some roasted walnuts.
14.
Now power-bake them in an oven for 10 minutes at 350 degree Celsius.
15.
Plating:
16.
On a plate, spread a spoon of custard and maple syrup on one side. Now place the hot tart in the center garnish with maple glazed walnuts and raspberries. Place a scoop of maple walnut ice cream in the center of the tart and finally dust a little icing sugar on it.
Tags:
4
Share Recipe
Share Recipe