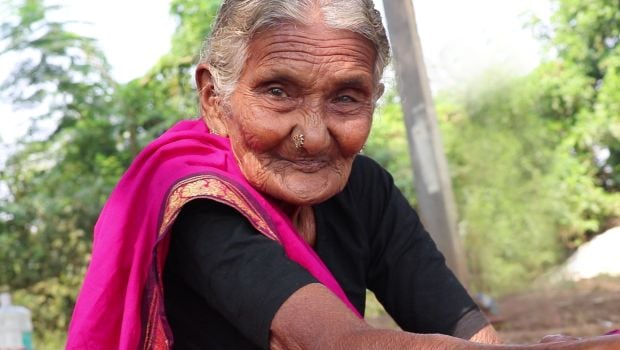 Highlights
We are living in a time where the internet is used as a vast platform to showcase what we think and feel. Besides browsing aimlessly, some people also choose to show their talent and tell their stories. We have so much to do and see on the internet! It is like a window to the outside world. YouTube, which is one of the biggest sources of entertainment, is a platform where you often come across videos of people from all walks of life beaming with talent. One such example is the 106-year old Mastanamma from Andhra Pradesh who is said to be the oldest YouTuber in India. She cooks amazing traditional dishes and has around 3,00,000 subscribers added to her channel. The name of the channel is Country Foods, which is run by two friends cum partners Laxman Karre and Srinath Reddy. Read on as we tell you the story behind this famous lady.

Mastanamma with her grandson Laxman Karre and his partner Srinath Reddy

A cotton sari clad, 106-year old Mastanamma has set some serious life goals for youngsters. Her warm face is hard to turn away from, and we know her countless experiences in life has made her what she is today. Her grandchild Laxman along with his friend Srinath opened a gateway for Mastanamma to cook, which is something she loves the most.

How Did Mastanamma Become a YouTuber?

One of the two partners Srikanth Reddy tells us happily, "Well, we never started our YouTube channel with Mastanamma. Back in the year 2016, we started a channel called Country Foods for bachelors, where we showcased simple recipes that could be easily cooked and savoured. We didn't get a lot of traction then. After around four to five months, we went to Laxman's village home in Guntur District in Andhra Pradesh. That's when I met Laxman's granny Mastanamma. While we stayed there, we saw granny cooking traditional food with such ease at such an old age. That's when Laxman and I decided to make two to three videos with Mastanamma preparing different dishes and uploaded them on our channel. We received brilliant viewership within a few days of uploading the content. People loved Mastanamma, her style and her dishes. We saw so many positive comments and that's when we decided to do more videos with her."

With increasing viewership and requests for new videos, the new found attention was amazing for the boys. They told this to their granny, but she never really understood them.

On being asked what the reason behind the name Country Foods is, he quickly answered, "Our idea to open this channel was to showcase our Indian culture and traditions. We wanted to popularise Indian food and the traditional spices only found in India." On being asked about Mastanamma's signature dish, he said that her Brinjal Curry is the most loved dishes of all.

"The idea of shooting Mastanamma's cookery show in paddy fields was to show how beautiful our village is. The beauty lies in these fields where crops are grown and harvested. You know, we have numerous viewers from foreign countries too and they love our videos, majorly because there is so much Indian-ness in it. It showcases Indian fields and Indian food cooked by a beautiful old lady with love."

Before making a video, the trip ideate and decide on the menu that Mastanamma will cook. She lists down all the ingredients she requires and the boys make sure everything is ready. Mastanamma has a lot of relatives in this village. The day she cooks something, they come over to relish the dishes and they love it too.

The best part about Mastanamma is that she is super active at this age and prepares everything from scratch in the most natural surroundings. Her effortless cooking videos clearly show her love for cooking. This undying love may have got her loads of accolades, but Mastanamma has been a source of inspiration for so many people without even realising it.

CommentsWe are sure you would love to watch her cooking. Here is one of her many videos: