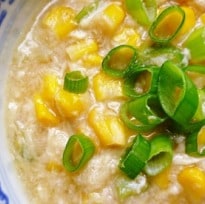 Vegan barbecue treats to soups or stews, our Dinner Doctor has some scrumptious ideas to savour your saved sweetcorn

A French-Canadian acquaintance of mine once declared dismissively that the British were the sort of people who put sweetcorn on their pizzas. "Yup, and we put vinegar on our chips too," I said cheerfully as she scowled. But while the British can be blamed for several crimes against food, can scattering sweetcorn on their pizzas really be one of them?

Ask most people how they like their corn on the cob, they'll probably tell you just grilled and slathered in butter. It sounds delicious, yet in the UK alone we throw away 16,000 tons of sweetcorn away every year. Admittedly 7,000 tons of this waste is typically considered unavoidable; the husk, silk and core. But that still means that more than half of the waste is avoidable; thrown away because it has gone off or perhaps too much was cooked, or perhaps by someone who was just bored by a summer of stuffing themselves with buttery grilled corn and had run out of good ideas.

Sweetcorn does have a relatively short shelf life. Not because it goes off but because corn's natural sugars convert to starch. So ultimately it won't taste very nice. Ideally, delicate sweetcorn should be eaten as quickly after it has been harvested as possible, but most of us don't know how long the cobs have taken to get to from farm to table.

Yet it is very tempting to buy lots of corn cobs, particularly when the supermarkets tend to sell them at reduced prices or on special offers during the season. Sadly, this can be a false economy, unless you are able to freeze them, as they really do need to be eaten sooner rather than later. It is not all doom and gloom as you can slow down the sugar to starch conversion by properly storing fresh corn.

A soup that is perfect for the summer but comforting in winter too, this is a taste of my childhood in Malaysia.

Stand each cob on its end on a chopping board. Cut through the sides of the cob with a sharp knife large. Tip the corn kernels and any corn milk (the milky liquid which exudes from the cobs/kernels when you cut into them) into a bowl. Set aside, reserving the stripped cobs.

Heat the chicken stock in a large saucepan and bring to the boil. Add the stripped corn cobs. Simmer for about 20 minutes. This imparts a lovely, sweet flavour to the stock. Discard the cobs and set the stock aside.

Heat the oil in a large heavy-based saucepan (or wok) over a high heat. Quickly fry the white parts of the spring onion together with the chopped ginger for about 30 seconds.

Add crab meat. Sprinkle over the rice wine and stir.

Add the corn, stock and soy sauce. Simmer for about 5 minutes.

Combine the cornflour with the water and sesame oil. Stir until smooth. Add a few splashes of the hot soup and stir to ensure there are no lumps.

Tip the cornflour mixture back into soup, making sure that it has dissolved.

Pour the beaten egg into the soup, stirring with a fork (in a wide, whirling motion) to break up the strands as they form in the hot soup.

Tips: Replace the rice wine with mirin or dry sherry. While this is nicest with fresh crab meat, a tin of crabmeat will do quite well. Sometimes I prefer a thinner soup; I omit the cornflour but often add cooked cellophane noodles instead.

One of my favourite side dishes is maque choux, a corn stew from Louisiana. Creamy sweetcorn, chopped peppers and onions stewed with a little chilli and garlic is the perfect summer dish. It is delicious served with grilled prawns and spooned over rice.

Remove the corn husks and silk if present. Wash and shake dry.

Place the cobs on a chopping board and using a sharp knife, slice down, cutting the corn kernels off the cob. Tip the kernels into a bowl, including any corn "milk". Set aside.

Heat the oil in a saucepan over a medium heat. Add the butter. When it melts, add the onion and fry gently for about 5 minutes. Add the garlic, peppers and chilli.

Continue to fry gently for about 10 minutes, stirring occasionally.

Add the chopped tomatoes and stock. Cover the pan and simmer for 5 minutes. Add more liquid if it looks as if the mixture is drying out.

Add the sweetcorn and sour cream. Season to taste. Simmer gently for 10 minutes, stirring occasionally, until the corn has cooked through but is still crisp.

Before serving, stir through the chopped basil.

Tips: I used a mixture of a little green, red and orange peppers to make this stew. The remainder of the peppers have been earmarked to make a roasted pepper salad or I will pickle them, for a taste of summer all year long! You can include a little smoked sausage to stewing mixture for an extra smoky flavour. Alternatively, substitute bacon dripping for the butter in the recipe.

Other ideas for what to do with corn-on-the-cob:

4. Nazima Pathan of Franglais Kitchen's charred asparagus and sweetcorn is a taste of the far east, dressed with peanuts and chives. Any vegans at your BBQ will be fighting off the meat-eaters!

5. Natalie and Valerie Wong of Twinny Dip show you how to make humita, a creamy spiced corn pudding; a Native American dish popular in Latin America.

6. Louisa Foti of Eat Your Veg's fantastic sausage and corn kebabs on the barbie are a fabulous feast for all the family!

7. Jen of Tiny Urban Kitchen's Taiwanese corn on the cob is brushed with a sweet and savoury glaze of soy, chilli and garlic - a winning barbecue recipe.

10. Marie Porter of Celebration Generation's corn and black bean soup is a hearty and spicy taste of Mexico.

11. Rupert Kirby of Casa Rosada's sham chowder made with leftover spicy pea soup; two recipes in one - an absolute bonus!

12. New York based blogger Najwa Kronfel combines her Honduran and Palestinian roots to make these fabulous fish tacos with a corn salad.

15. And if jelly is more your thing, what about this sweetcorn jelly from Rachel Rappaport at Coconut and Lime.

16. Sweetcorn is an usual food in that it can be classified as both fruit and vegetable, as well as being a grain (like wheat). Tim at Lottie and Doof can't make up his mind whether his sweetcorn ice cream should be served with fruit gallettes or raspberry jam, or as a savoury with lashings of black pepper!

17. There is actually a lot of flavour in the core of the corn cob, so don't throw them away. I used mine to add extra flavour to the crab soup recipe above by infusing the stock with extra corn flavour. If you have room, then store the leftover cobs in the freezer and add to stock for use in soups, stews or risottos. Although remove before serving as they are inedible! Not only can you use the used cobs in stock, but if you smoke the cobs first the leftover cores will add a fabulous smoky flavour to any stock.

So steamed or stewed, creamed or grilled, what is your favourite way of eating sweetcorn?