Are You Struggling With An Eating Disorder? Signs and Symptoms To Tell

Eating disorders are often neglected as a state of mind but they may actually be related to depression, anxiety and emotional instability. They can have long-term health consequences if left untreated. 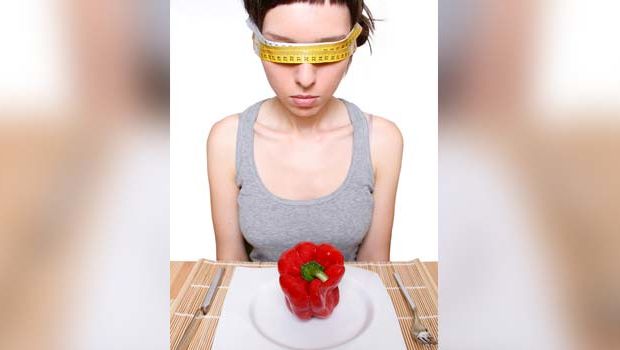 Highlights
'I can binge-eat pizza all day' or 'You have lost so much weight, you look anorexic!' - haven't we heard these comments quite often or are even guilty of passing them? Eating disorders may be treated casually but they can be as serious as any other ailment. They comprise of a range of psychological disorders characterized by abnormal or disturbed eating habits. Eating disorders are often neglected as a state of mind but they may actually be related to depression, anxiety and emotional instability. They can have long-term health consequences if left untreated. Some of the most common eating disorders include anorexia nervosa, bulimia nervosa, and binge-eating disorder which can result in extreme emotional uheaval, uncontrollable attitude, and aggressive behaviour. Here is a list of eating disorders you should know about and symptoms to spot them.

People suffering with anorexia live under the constant fear of gaining weight, when they actually happen to be underweight. They tend to diet relentlessly to a point of starvation. Their distorted body image makes them believe that they are overweight or are constantly putting on weight. Some of them may also become obsessive about counting calories and portion control. If not treated in time, anorexia may lead to organ failure and malnutrition.

Bulimia Nervosa is characterized by repeated episodes of binge eating followed by behaviour that compensates for overeating such as forced vomiting, excessive exercise, or extreme use of laxatives or diuretics. Victims of bulimia may live under the intense fear of weight gain and suffer from body image issues. They are ashamed of their weight. The binge-eating and purging routine is typically followed in secret, creating feelings of shame, guilt, and lack of control. Since bulimics usually tend to hid their characteristic behavior, it is difficult to spot the disorder early. If  left untreated, bulimia can manifest in long-term health problems like abnormal heart rhythms, bleeding from the esophagus due to excessive reflux of stomach acid and also dental and kidney problems.

1. Binge-eating in fixed intervals
2. The urge to purge excessive food intake by forced vomiting or consuming diuretics
3. Skipping meals or avoiding eating in front of others, or eating very small portions in public
4. Exercising aggressively
5. Attempts to hide the body in lose clothes
6. Constantly complaining about being "fat"

Most of us, use the term 'binge eating' casually for indulging in our favourite delights to our heart's content. Sadly, it can also be a serious eating disorder. Binge-eating disorder is one of the most common disorders in the world, and is often linked with depression and poor mental health. Victims tend to indulge in emotional eating as it relieves them from stress and disturbing self-image issues. You may feel you can't stop eating, and you needn't be even be hungry to eat. You feel guilty about eating, and go back to eating again to feel better, and use food as a reward for yourself. This way, you may be trapped in vicious cycle. Unlike bulimia nervosa, periods of binge-eating are not followed by purging, excessive exercise, or fasting. As a result, people with binge-eating disorder are often overweight or obese.  In the long-run, binge-eating may lead to heart diseases, poor blood-circulation, diabetes, kidney and liver dysfunction and joint pains due to excessive weight. According to Macrobiotic Nutritionist Shilpa Arora, "Binge-eating could stem from boredom or an emotional trigger, which compels you to start munching something. It becomes a habit, because you are getting pleasure out of it. You are most likely to pick comfort foods that could be high carb, high sodium or high in sugar. These tend to be very satisfying and so you keep reaching out for them. You get a sense of relief after consuming them."

Promoted
Listen to the latest songs, only on JioSaavn.com
Symptoms of Binge-Eating Disorder

1. You tend to eat much more food than you would on normal occasions
2. You feel guilty and depressed about eating so much
3. You feel helpless and out of control at the thought of limiting your food intake
4. You eat really fast - at a pace which may not be normal
5. You indulge in binging at least once a week for about 3 months on an average
6. Social withdrawal from friends and family
7. You have to eat even when you are not hungry almost to a state of discomfort
8. Try to eat alone so no one sees you eating

CommentsFirst, accept that there is a problem. In most cases, people suffering from eating disorders are too embarrassed, live in denial or simply unaware of the severity of their condition to seek help. An eating disorder is not just a matter of a dietary fix but a psychological condition that requires psychiatric intervention and lifestyle changes. If the victim is in denial, people around them must remind him or her of the severe consequences. An eating disorder is treatable as long as you acknowledge the condition and open up to your counsellor, psychiatrist and nutrition expert. A comprehensive treatment specializing in eating disorders is often fundamental in recovery, which cannot be successful if you aren't honest to your counsellor or dietician.  Doctors may prescribe medication to help manage the urge to starve or binge. A dietician may chart out a customized daily diet plan to help you deal with the symptoms. Yoga and meditation can also take your focus away from negative thoughts, and help in building a positive body image.