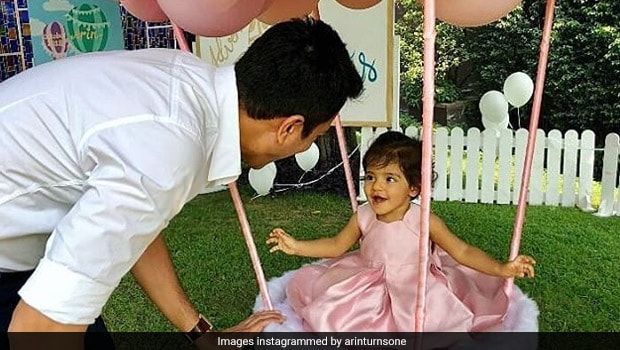 Bollywood and south Indian film actor Asin Thottumkul's daughter Arin turned one on October 24th and the actor has been dazzling fans and followers with pictures and videos of the dreamy birthday bash. Asin, who married businessman Rahul Sharma in 2016, didn't leave any stone unturned in giving her daughter a birthday party, fit for a princess. The doting mother of one shared numerous pictures and videos of the royal birthday bash on her Instagram page and the party looks like what could be the dream bash of every kid. The party had balloons, an adorable cake, a dessert table with delicious looking cupcakes and macarons, and, of course, the birthday girl was dressed up in the finery fit for the regal baby that she looked like. Both Asin and Rahul Sharma flooded the interwebs with bright and happy pictures of their daughter enjoying at her birthday party and snapshots of the party are the best things you'll see on the internet today.

The theme of the party seemed to be the different aspects of Arin's personality who, according to her mother, loves "outdoors, books and travel". There were numerous posters and sketches that described Arin as 'the girl on the go'. But we couldn't take our eyes away from the cake, which looked like a literal showstopper in an already tasteful and cutesy birthday party.

Doesn't that look absolutely amazing? And here's the little angel posing with her grandparents in front of the cake:

Arin's father and Asin's husband Rahul Sharma also posted a very sweet message for his daughter on Twitter, which reads, "A year ago we welcomed a Gorgeous, bright eyed, little angel into this world. She just turned ONE!!! Where does time fly? Happy Birthday ARIN, my daughter! Why do u have to grow up so fast? Happy 1st Birthday!" The birthday was a grand day time affair, which has set the bar for first birthdays around the country pretty high, wouldn't you agree? Well, we wish little Arin a belated happy birthday!