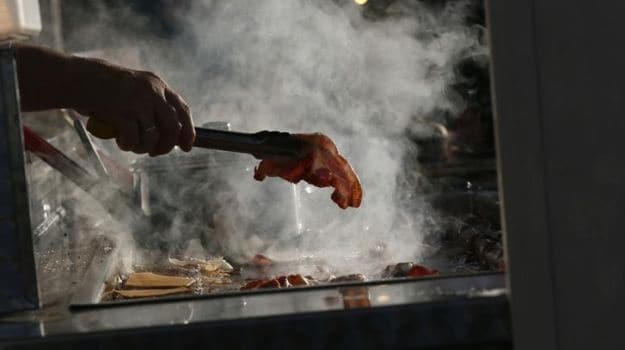 A woman prepares bacon in a burger van ahead of Stoke City's FA Cup third round soccer match against Wrexham at the Britannia Stadium in Stoke-on-Trent, central England January 4, 2015. REUTERS/Stefan Wermuth/Files

Sales of pre-packed sausages and bacon fell sharply at Britain's top grocers in the weeks following publication of a World Health Organisation (WHO) report, which said eating processed meat can cause bowel cancer.

The France-based International Agency for Research on Cancer (IARC), part of the WHO, last month put processed meat in its Group 1 list, which includes tobacco, asbestos and diesel fumes, for which there is "sufficient evidence" of cancer links.

Researcher IRI measured sales of bacon and sausages at Britain's major grocery stores in the week ended Oct. 31 of the IARC announcement, and the following week ended Nov. 7, estimating the value of sales declines at about 3 million pounds ($4.5 million) over the two weeks.

Listen to the latest songs, only on JioSaavn.com
"While there have been links between certain types of meat and some forms of cancer before, this announcement from a highly respected global body was picked up widely by the media and has had an immediate impact on some people’s shopping choices,” said Martin Wood, head of strategic insight, retail solutions & innovation at IRI.IRI said sales of pre-packed sausages on a value basis fell 15.7 percent in the week to Oct. 31 compared with the same week the previous year, while pre-packed bacon sales were down 17 percent.
IRI estimated the incremental fall in sales due to the cancer scare at about 10 percent.