Blue Wine, the New Trendy Drink Of the Moment? 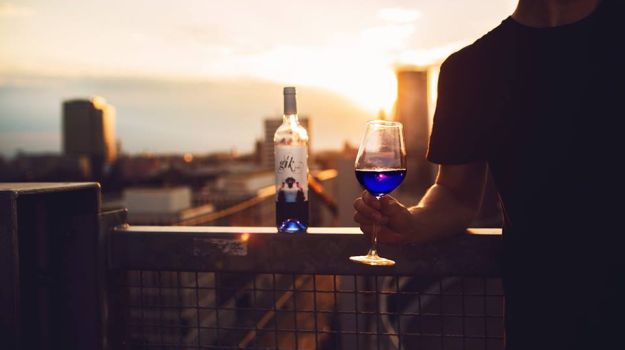 Think twice if you feel wine is a rather boring affair. Yes, the wine industry though open to new ideas to connect more to its young consumers has always remained traditional and has its boundaries hardly crossed. But there is a new variety that has got everyone talking. The new blue wine that's been unleashed by a Spanish company called Gik that is shaking up the wine industry.

Gik - a Basque-based startup is behind the new edition of wine that has broken the traditional barriers, with its website declaring "We are not vintners. We are creators. So we sought the most traditional and closed-minded industry out there." This angered wine traditionalists who think it's all just a marketing gimmick with no authenticity. No matter how much backlash Gik seems to be garnering from the traditionalist it's clear by the company's marketing materials and social media posts that they're going after millennials, who are apparently drinking more wine than any age groups. According to Fortune, millennials consumed 42 percent of all wine in the U.S. Boomers drank 30 percent and Gen Xers drank only 20 percent in 2015.

To make this blue-coloured wine, grapes are drawn from wineries in the La Rioja, Zaragoza and Courthzon regions. They claim that they don't add sugar but non-caloric sweeteners instead. Its signature color 'blue' does not come from artificial coloring but is infact produced through a pigmentation process. First, a base is created from a mixture of red and white grapes, which is then added to two organic pigments, indigo and anthocyanin that come from the very skin of the grapes used to make wine. A bottle sells for about $11, and is currently available in Spain, France, the United Kingdom, the Netherlands, and Germany. So, for all those adventurous souls who don't mind a little twist to your regular drink menu, try some blue wine (if available!) the next time you think of ordering something fun and different.